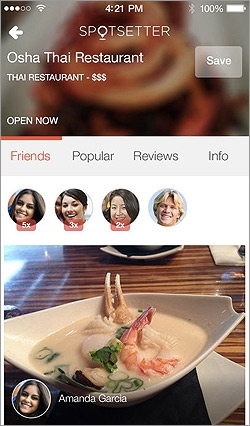 It was just a few months ago that Spotsetter CEO Johnny Lee was musing about how his startup’s social search model would dovetail nicely with wearable platforms like the rumored Apple iWatch and Google Glass. Software, not hardware, is key, he wrote. “That killer feature is personalization, something near and dear to our servers.” Lo and behold, after extended talks, Apple is reported to have purchased Spotsetter, which leverages a user’s social network to drive personalized recommendations about nearby places to go.

TechCrunch is reporting that the deal was closed in recent days, and Lee’s LinkedIn profile now describes him working for Apple.

The Spotsetter app has been withdrawn from the app stores in recent weeks. It used a combination of personal social graphs and review sites to deliver highly personalized results against searches on a map interface. The user would see what friends were saying about the venues and even designate certain contacts as experts to further hone the algorithm.

Interestingly, the startup’s CEO seemed to have his eye on the intersection of such personalized recommendations and wearables. Lee wrote months ago about how wearables demanded even more acute levels of contextual awareness and personalization in order to ensure that only the most relevant content to that person, place and time, made it onto the precious real estate of a smartwatch, for instance. “We think about what to show you before you walk into that restaurant and what to show after you sat down. Context matters and is powerful when applied thoughtfully,” he wrote.

Ultimately, Lee muses, the goal of wearable software must be invisibility.

“Spotsetter’s technology vision is personalization with keen awareness to context and privacy, with the ultimate goal of being invisible. Regardless of the platform recommendations are presented on -- a watch, a projection on glasses or car windshield -- when done right it works like magic. Our users won’t have to explicitly search; they get a great recommendation at the appropriate time with the right amount of content. Then they continue to enjoy the physical world without a thought about technology.”

Meaningful personalization is one of those digital horizons that always seem visible but still distant. The idea of Web and then mobile content morphing into true valet-like service has been in the air for more than a decade. But something always seems to hold it back -- either a lack of interest on the part of users, a queasiness over the intimate data it requires, or just the fleeting, start-up and crash nature of companies trying to drive innovation. But it remains an open question how much a broad range of people want machines anticipating user needs, with some combination of personal and contextual triggers. We often talk about fears over the surveillance-like aspect of these systems. But another question is whether people are ready to trust the algorithms with contextual discovery -- with making us aware of not only what we want to know but need to know. I wonder if there is a little fear of relying too much on algorithms we don’t understand or fully trust yet to do the discovery jobs we have been used to doing ourselves?