Google Plans To Get 'Fit' On New Health Battlefield With Apple 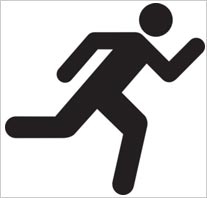 Apple and Google are starting to resemble Detroit car giants of old, or perhaps Coke and Pepsi in the boomer generation. The one-upsmanship is a predictable and perhaps as uninspired as additional chrome and haggling at the margins for those slivers of consumers who are not yet invested in the platforms for deeper reasons than incremental features. Not surprisingly, Google plans to follow Apple’s announced iOS 8 HealthKit framework for wearable devices and sensor-based physical monitoring with its own Google Fit platform that will aggregate inputs from both activity trackers and health apps on mobile devices, Forbes reports.

The plan is to announce at the upcoming I/O conference partnerships between Google and fitness tracking device makers and developers for using open APIs from Google to plug these apps and gadgets into a cloud-based data system for sharing across apps. The company is already planning working sessions at the conference regarding wearable app development.

It is not clear yet how the Google Fit framework will be integrated into partners and interface with consumers, whether through a new Android release or a stand-alone app. Despite Android’s dominance numerically in the smartphone market, its inherent fragmentation impacts all such attempts to roll out new features. Programs that are reliant on the OS have to contend with OS update being incompatible or unsupported on OEM hardware. Worse, Google is always competing with its own partner Samsung, which is fond of customizing the Android platform and pressing users to employ Samsung-branded apps, devices and ecosystem. In this case, Samsung has its own Gear line of wearables.

As exciting as an emerging category may always seem to a maturing market like smartphones, the depth of public taste for these devices and the personal data feedback loop they produce is highly questionable. The people who hook into these systems often appear to become enamored of the data. My own wife is suffering withdrawal from her Fitbit Force since having to send it back for the device’s infamous recall. “I do not know how many steps I took today, and that is sad,” she announced last night. I, on the other hand, look forward to not being recruited at 11:30 p.m. for a power walk to get her over the top of her 10,000-step goal for the days she isn’t running.

The larger question is whether such competition between Apple and Google really amounts to much in the market. Loyalty to one OS or the other is grounded in so much more than just a single sliver of features that the arms race between two major contenders is really just a matter of not being seen lacking. How much creative innovation goes on here really depends on app developers who can make all of this data useful and compelling for users. This is where things get interesting, where we see how a and if the “quantified self” concept has real appeal to a broad public. There are fascinating cultural implications to this intersection of self and data. The first that comes to mind is a classic theory of the late industrial age. One cultural history thesis around the highly mechanized amusement parks like Coney Island argued that these environments helped domesticate for American workers the machinery and technology that were displacing them in other areas of the economy. The same machinery that alienated craftsmen from older talents and rationalized work into assembly line piecework was a source of joy and entertainment in the amusement park context. There is a fascinating parallel to the ways in which the quantified self introduced by fitness trackers turns the Big Data revolution, which in other quarters segments and stereotypes individuals into targetable categories, into  source of personal empowerment.

American cultural historians have about two decades of dissertations, conference papers and trendy syllabi to mine here.