Richard Avedon Could Still Kick Your Ass On Instagram 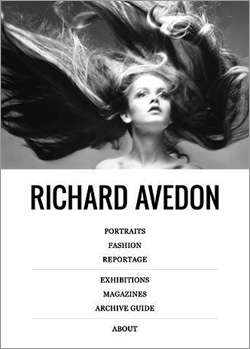 In principle I celebrate the rise of the visual social networks on mobile. I think they tend to highlight our better sentiments and moods than the social nets that preceded them. As I have argued here before, Instagram and Pinterest -- even Vine -- brought to social media a refreshing break from the tedium of trivial posts, linkage and cut-and-paste items. Their focus on visual and the act of personal creation, seemed to focus peoples’ energies at first on sharing their inspiration, their passions. My daughter, who abandoned Facebook for Instagram years ago, told me it was hard to pick a fight and be misinterpreted on Instagram and Pinterest -- problems that led her to flee the Social Network. That is not as true now as it once was -- now people hold up provocative signs or hack others’ images. But on the whole, a lean-back scroll through your daily social mobile image nets is really a review of people’s pleasures and creativity.

For marketers these social nets represent something like a revival of an old media platform -- print. Scrolling through an image feed is akin to the ritual flip through a fat enthusiast magazine or fashion monthly. The eye gives each page/screen about a second or two to register something of value. By the way, it is not surprising that far and away the most popular magazine brand on Instagram is the undisputed king of the striking image, National Geographic (5.5 million followers). This is a pretty easy lift for them. They just trickle out gems from a library that has been dazzling us for over a century.

The rest of you have to work harder than that.

The major sports brands already get this, of course. Adidas and Nike both have luscious portfolios of NatGeo-like action shots, although I am not sure any of them capture the personal perspective that make them inherently social. Starbucks, ranked number two among brands on Instagram, is looking tired with its relentless plays on its own product. It needs a story. GoPro, which crushes it on YouTube, is also a leader on Instagram, in part because they do have an ongoing story -- their owners’ sheer adrenaline that is communicated in the stills here. Most of these images have a subtext shout of “Wooo” lurking beneath.

In many ways, Instagram is the perfect place for a daily dose of a singular perspective, not just a product push or a bit of cleverness. I think advertisers and media companies should be reconsidering classic photography as inspiration for these new mobile social media, And I don’t mean just great photography as a medium but as a narrative. It is the ongoing perspective of an Alfred Stieglitz, Diane Arbus, Weegee, Edward Steichen, Robert Capa or Ansel Adams, told through subject choice, composition, tone, mood, etc. that drew us to them again and again. It is this larger story established in perspective that I see lacking in many branded visual feeds.

A good example of this is one of the best Instagram feeds I know for the “Ballerina Project.” Driven by New York Photographer David Shitagi, it works across other social media as well but is especially effective on Instagram. Shitagi works with ballerinas to pose them throughout New York City landscapes, architecture, and subway scenes. The contrast and continuities between the diminutive but solid dancers and the many visual realities of the city are striking, and the impact is cumulative. Like a fine coffee table book of a single photographer’s vision, each day’s installment builds on this great tension.

This admittedly thin insight came to me while I spent a couple of hours last night luxuriating in a new Avedon iPad app from the Richard Avedon Foundation. This free and very generous compendium of a true master of personality photography is an object lesson in images that do what a great Instagram image should make you do -- stop in your tracks and consider. Avedon’s famously stark black-and-white style plays perfectly in an Instagram era. In both his staged and more informal work, he always seemed to aim for a singular insight about a person. But the job was to penetrate, not collaborate. His portraits of the Chicago 7 in the late sixties, for instance, pretty much foretold a movement whose own core personalities probably couldn’t hold together. His portraits of James Baldwin capture at once determination and a hint of fear. Even his staged celebrity photos winnowed out complexity to find a main gesture, trait, quality. His many images of the New York abstract expressionists of the 1950s almost seemed to poke at some of them, emphasizing their deliberately frowsy appearance, giving some even a mean and sinister look. Although Avedon himself was responsible for some of the most celebrity-gushing magazine covers of all time, much of his greatest work understood his job was to find the person beneath the fame.

I couldn’t help but compare Avedon’s celebrities and politicians to his closest modern counterpart Annie Leibovitz. Leibovitz’s undeniably attractive images are highly staged, almost always expressive of something we already know or want to think about the celebrity, and they pretty much idealize whatever entertainment or power system they depict. They are fun. But they can’t be mistaken for insightful.

Which is all a long and obtuse way of getting to the point that we are not even close to understanding how best to leverage the visual social media by media itself. We might do well to take some cues from the artistry that some of the greats of the last century found in that emerging technology of communication, photography. Its power often came from sustained perspective, a very personal relationship to subjects, the ever-present unease of voyeuristic views. Most of the brands I see working here are still working on a different less intimate channel than the medium seems to invite.