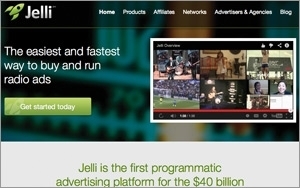 After five years in operation, Jelli is shuttering its user-controlled social radio services and station apps and completing its reinvention as a programmatic ad platform for radio, the company announced this week. The user-controlled and social radio products will go dark on Sunday night at midnight, marking the end of an interesting experiment that attempted to connect digital communities and online voting with broadcast radio airplay.

Jelli’s new incarnation as a programmatic ad platform serving radio networks, advertisers and stations has been at least two years in the making. In March of this year, the company announced the launch of SpotPlan, a Web-based programmatic buying platform for buying radio ads.

On the Jelli blog the company explained: “When we first launched Jelli’s social radio service, our vision was to transform how you listened to music on the radio and engaged with your favorite local radio stations. Five years later… we proved that we could change radio and reinvent the experience.”

The post continues: “However, in spite of our success, our social radio service didn’t take off nationwide as we had hoped. This has led the team to make the difficult decision to retire social radio and focus completely on a new innovation for the broadcast industry.”

SpotPlan is compatible with third-party buying and selling software from broadcasters, networks and advertisers. It is also integrated with Jelli's RadioSpot ad server and RadioDash reporting service, enabling full automation of buying, running and reporting for campaigns.

In March, Jelli said SpotPlan had been adopted by over 350 radio stations in 128 cities nationwide, reaching 44 million unique listeners per week, and had struck deals with operators and networks, including Townsquare, Emmis and Entercom