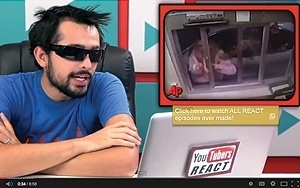 The Fine Brothers, Benny and Rafi -- best known for their "react" video series on TheFineBros YouTube channel with about 8.8 million subscribers -- are working with Nickelodeon to produce the first season of a television show.

The duo met up with Nick Cannon, who owns the production company Incredible Crew, and connected them with Nickelodeon. "React to That" will air 12 episodes in the first season, turning the YouTube clips into half-hour television shows. The brothers expect filming to "wrap" in late July or August, but could not say exactly when the episodes will air.

Benny and Rafi also teamed up with Friskies to search for the next Internet cat superstar with the third annual "The Friskies" video, which launched at VidCon Friday. Friskies will accept submissions through July 21, for a chance to win cash prize of up to $25,000.

Some of YouTube's fastest-rising video stars have the opportunity to make millions as more video shows turn into television shows and full-length feature movies. "The possibilities are really, really high," said Beth Greve, chief revenue and partnership officer at Awesomeness TV, which DreamWorks acquired in 2013. "It's a little bit of lightning in a bottle when you talk about Michelle Phan and Jamal Edwards. The reason YouTube stars do well is because they're true to themselves."

Stars like Olga Kay with her Betty Boop edgy image, the Fine Brothers' honesty and likeability, or the cuteness of Grumpy Cat's personality have a genuine appeal. These video stars are the digital equivalent of Hollywood legend Lana Turner being discovered at Schwab's Pharmacy.

Not long ago, Wall Street analysts pressed Google founders Sergey Brin and Larry Page to explain how the $1.65 billion investment to acquire YouTube would turn profitable. Fast forward nearly eight years: The video site not only generates revenue, but its video stars have the opportunity to crowdsource funding from fans.

Whitney Evans, assistant brand manager for Friskies at Nestle, Purina North America, said "the sky's the limit for Grumpy Cat." The brand worked with Pet Smart to develop a wet cat food exclusively sold through the retailer. "Grumpy Cat is so well liked throughout the world that anything we work with her on is pretty much guaranteed success," Evans said.

When asked how Grumpy Cat's stardom changed her life, Tabatha Bundesen told Media Daily News to expect to see her feline friend star in Lifetime's "Worst Christmas Ever" feature movie coming this holiday season. Plus, thre is a book deal on the horizon, T-shirts in stores and an iced coffee drink at 7-Eleven that Bundesen calls Grumppuccino.