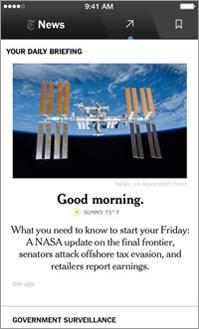 The New York Times Co. earlier this year rolled out a pair of apps -- NYT Now and NYT Opinion -- as lower-priced sign-up options to help bolster subscription growth. The former is a curated version of the Times that includes articles, videos and slideshows and costs $8 a month, while the latter offers full access to the paper's opinion pages for $6 a month.

A digital Times subscription starts at $15. During the company’s second-quarter earnings call Tuesday, Times executives highlighted NYT Now as being “particularly well-received.” The new app, along with other new offerings like NYT Opinion and Times Premier -- its top-tier subscription package -- accounted for most of the subscription gains in the quarter, according to Times Co. CEO Mark Thompson.

But the new products weren’t exactly rocket boosters. The Times ended the quarter with 831,000 digital subscriptions, adding only 32,000 in the period. To reach new -- especially younger -- audiences, Thompson acknowledged the company can’t just rely on the prestige of its brand.

“Our new products, in particular the NYT Now and Opinion apps, must market to and reach brand new audiences, stand out on their own and compete in a crowded marketplace. This effort will take some time, and we’ll need to build and flex some new marketing muscles,” he said.

In that vein, the Times will initially offer its forthcoming Cooking app for free to build up the user base before beginning to charge for it. The freemium approach, where developers offer games or other apps for free and make money via in-app purchases, has become the dominant model for monetizing apps. But if the Times simply puts up a paywall, the Cooking app after a certain period, it could strike users as a bait-and-switch.

More broadly, creating a series of standalone apps also raises the risk of cannibalizing bundled digital subscriptions. Thompson acknowledged that NYT Now and other new products led to some cannibalization of core package subscriptions, but suggested a bigger problem is the Times not presenting its wider range of subscription options clearly enough.

Given the shift of its readers to mobile devices, and its dire need for new revenue streams, it makes sense for the Times to build out new mobile products. But it won’t be easy to pull in new mobile subscribers, even at lower prices, when people are used to paying nothing for apps. And as a comparison among digital subscription services, someone paying $8 a month for Netflix may view the same cost for a niche Times app as pricey.

The Times also introduced native advertising with NYT Now in the form of “paid posts.” Executives didn’t say much about the performance of advertising in the app so far, but Thompson emphasized that the Times is focused on improving mobile monetization, especially on smartphones.

“The progress we’ve made on the presentation of our content in both the Now and Opinion apps must be matched across all of the mobile offerings with improved pathways to subscription, and more advertising units supported by better ad tech,” he said. The growth of that advertising, however, depends in part on expanding the subscriber base via new apps. And getting users to pay for any app will remain a challenge.