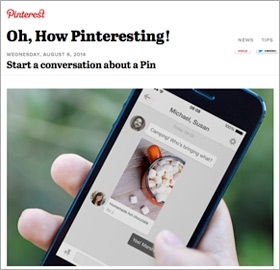 Pinterest is breaking into mobile messaging with a new feature for users to chat about particular Pins, or anything else that comes to mind.

Encouraging broader interactions, Pinterest has also made it possible for users to send Pins -- the visual bookmarks that users amass on their "boards" -- and messages to multiple people.

“We wanted to make it easier for [community members] to have a good old-fashioned conversation,” Tom Watson, a product designer at Pinterest, explained in a blog post. “We hope this will help you plan projects, swap creative ideas and share your best discoveries,” Watson said.

The move seems like a logical next step for Pinterest, which has already established itself as one of the Web’s more popular sites.

A cross between a social network and a visual search engine, about 40 million users are expected to visit Pinterest at least once a month, this year -- nearly 16% more than a year ago -- according to eMarketer. Pinterest also claimed about 750 million boards on its platform, with 30 billion pins about travelers, foodies and more.

Driven by a dramatic rise in mobile usage, messaging has become a key battleground for social networks. That fact became glaringly clear after Snapchat rebuffed a $3 billion buyout bid from Facebook, last year. Since then, Facebook has dropped $19 billion on WhatsApp, and launched its own ephemeral messaging app, dubbed Slingshot.

Despite aggressive monetization efforts -- like adding a self-service component to its Promoted Pins ad product -- Pinterest recently decided to take another $200 million in capital at a valuation of $5 billion.

The company has used a significant share of capital on acquisitions, including Icebergs -- a Barcelona-based start-up that specializes in content-organizing and sharing tools, which Pinterest agreed to buy last week. Other acquisitions include culinary community Punchfork; review aggregator app Livestar; coding competition site Hackermeter; and image recognition and visual search startup Visual Graph.

The company is also focused on international growth and additional monetization.

Worldwide, Pinterest says it is now available in 31 countries, while international users represent about 30% of its total audience.

Pinterest declined to elaborate on its messaging strategy, on Thursday.