Axe Wants You To Kiss For Global Harmony 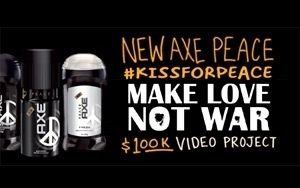 For years Unilever's Axe's brand positioning has embraced the dynamic between guys and girls via traditional media. Today, however, potential Axe users have become more multi-faceted-- they want to be reached on all aspects of their lives and even be involved in the message, thus pushing Axe to explore advertising beyond its traditional channels.

Now, the brand has teamed with online platform Tongal for a user-generated contest that supports its Super Bowl "Make Love, Not War" TV commercial. "Axe sought out to bring guys and girls together to affect change with a simple, yet powerful, act: a 'kiss for peace' leading up to Peace Day on September 21st," says Matthew McCarthy, Senior Marketing Director for Axe and Men’s Grooming Pro.

For this Peace campaign, Axe worked with Tongal to task its community members with creating videos that reflected their representation of #KissForPeace.

First, the contest kicked off in January by seeking ideas based on kissing in under 140 words. Some of the winning suggestions included filming awkward kisses and filming random strangers kissing. Then, entrants pitched how they would translate a pitch into a video. Next, directors selected one of the winning ideas and submitted their take. Pitch winners were also given time and money to crank out their vision.

"AXE put up one of the highest prize pools in Tongal history and provided a great concept for our creative community to riff on," says Tongal Founder/President, James De Julio. "They fully embraced the Tongal process and the result was some amazingly diverse and poignant content."

Four new videos are running on the Axe YouTube page, with each featuring the hashtag #KissForPeace to further spread the movement through social media. One of the winning videos can be seen here.

These videos are also promoted on the brand's Twitter page. Thus far, over 112,000 shared photos were posted across social media from supporters sharing their #KissForPeace.