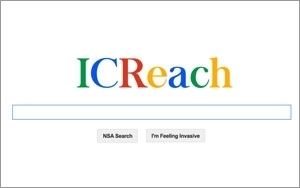 The United States National Security Agency (NSA) has built an information-sharing database that allows intelligence community analysts from across the U.S. government to access billions of records detailing the lives of people worldwide. The system, ICReach, was made public Monday and can hold up to 850 billion records, according to reports. It's really only one of many that government agencies use to share information.NSA began to develop the search engine around 2007, per The Intercept writer Ryan Gallagher, but was made public Monday after former intelligence contractor Edward Snowden disclosed classified documents to the news site.

A linked memo explains that the federal database, which can process and search through billions of records, aims to improve communications and the ability for the NSA to "collect, process and store vast amounts of communications metadata related to worldwide intelligence targets."

The research shows that the ICREACH database with the Google-like search engine allows analysts from about two dozen government agencies -- including the Federal Bureau of Investigation and the Drug Enforcement Agency, among others -- to share details collected by U.S. intelligence agencies. In fact, about 1,000 analysts at 23 U.S. government agencies that perform intelligence work have access to the data, per Gallagher.

The details also make available a link to the 2006 letter written by John Negroponte, who was director of National Intelligence at the time, outlining his vision for the search tool that would "allow unprecedented volumes of communications metadata to be shared and analyzed" behind a search interface. It would cost an estimated $2.5 million to $4.5 million to build and maintain annually.

Memos dating back to the early 1990s show a database system that analyzes billions of phone records and phone directories to link between intelligence targets and other persons of interest as being one of the earliest projects storing metadata. After being criticized for failing to share information that could have potentially helped to prevent the 9/11 attacks, the NSA and other agencies set out to build ICReach, per Gallagher.