At a time when Madison Avenue seems to think all-things-digital, advertising awards curator The Gunn Report has assembled a visually powerful reminder that print media is more than just dead trees. The aptly titled “The Power of Print” report organizes the best of the best from more than 15 years of breakthrough creative ideas that could only resonate in print media, including magazines, newspapers and out-of-home.

The report, which ironically is available only in digital form (download it here), is an emotionally engaging showcase highlighting everything from TBWA\Chiat\Day’s iconic “Think Different” campaign for Apple (see accompanying image) to provocative public service efforts like the barcoded tiger depicted in Tiger Trust’s “Sale Must End” campaign (see below).

“In bygone days, good agencies invested considerable time and money in the training and education of their young people,” the report explains, noting: “Nowadays, alas, this has largely gone by the board - thanks to lower margins, fewer people and, as [TBWA Chairman] Jean-Marie Dru expresses it about delivering work ‘the move from a quarterly to a daily cadence'."

The report organizes print’s best cases in 13 formats ranging from informational to dramatized. 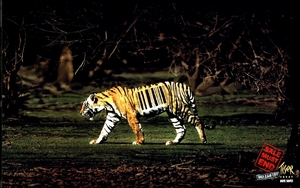