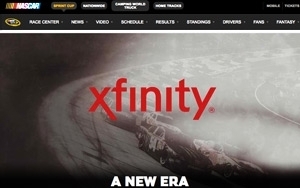 Looking to raise its marketing awareness, the Comcast Xfinity TV-digital entertainment brand has struck a major deal with NASCAR to take over the title sponsorship of one of its national race series.

That series, known as the NASCAR Nationwide Series, will now be known as the NASCAR Xfinity series. The 10-year old deal starts January 2015; financial terms were not disclosed. But estimates are that Comcast is paying around $9 million a year for the association.

The Comcast Xfinity digital brand becomes only the third title sponsor for the race series. Nationwide Insurance had the title sponsorship for seven years. Estimates are that Nationwide paid around $10 million a year for the association with the race.

In addition to the NASCAR Xfinity series announced on Wednesday, Comcast’s NBC Sports will begin airing NASCAR race events in July 2015. That 10-year deal is worth some $4.4 billion.

Among many other race series, NASCAR has three national series -- which include its big NASCAR Sprint Cup Series, as well as its NASCAR Nationwide Series, and NASCAR Camping World Truck Series.

Brian France, chairman/chief executive officer of NASCAR, stated: “NASCAR and Xfinity are each leader brands with much in common. Both are focused on innovation and have products built for speed. Together, we will work to take this series to new heights and elevate one of the most unique and powerful partnerships in all of sports.”

Dovetailing on its new Comcast TV marketing deal, NASCAR says its fans spend an average of four-and-a-half hours each week watching NASCAR on television and an additional two-and-a-half-hours each week following the sport on digital platforms.