Campaign Says Stolichnaya is 'The Vodka' - Not 'A Vodka' 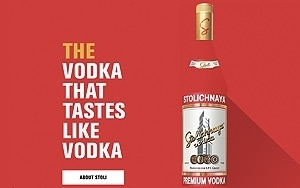 Stolichnaya Vodka's new campaign is its biggest in years, and the first one in a couple of decades in which the company is an independent entity, free from a holding company.

The campaign, via Stoli's new AOR Richmond, Va.-based The Martin Agency, which won the account earlier this year, is all about authenticity: Stoli as "the" vodka versus "a" vodka. Creative takes a different view of the bottle as the labels and cap stand out and the bottle is implied by the slightest color offset against a red background.

The campaign also brings back TV ads, which will arrive in 2015. The effort, which launched this week, includes print, out-of-home, and digital elements, all with the tag, "Stoli, The Vodka." Digital includes 25 animated shorts running on Stoli sites like YouTube, Facebook, and Twitter, with shorter versions on Vine and Instagram. They use the "a" versus "the" theme, as well, with one of them contrasting "a" shaker, a dog shaking, with "the" shaker, a women holding a martini shaker, while strapped into the old-fashioned stomach-strap shaking weight-loss machines.

John Esposito, president of North America at Stoli Group U.S.A., tells Marketing Daily that the underlying tactic is to reach Millennials with social. "It's not just about advertising, but providing the kind of content so [consumers] can talk to each other, and this campaign will deliver that."

And, he says, authenticity around the brand's 80-year longevity and production-to-sales integration is the bigger message. "Consumers are always looking for 'new' but what's happening today with younger consumers is they are looking for authentic brands, brands that deliver on quality." That, he says, is critical with vodka, because anyone can make it. "The barrier to entry in vodka is easy; it isn't like whiskey, which requires aging for years in barrels. And you can make it with pretty much anything. But we have always been a craft vodka in the sense that we control every element of our production, so we can talk about quality, heritage and authenticity."

Prior to William Grant and Sons, Pernod Ricard had the brand; before that Allied Domecq, notes Esposito. Thus, there has been little brand consistency. "Every time you change importers, the advertising changes, so there have been very mixed messages to consumers over the course of the years. Now we will have a clear and concise message."  The company appointed Martin this spring.

The campaign also puts the focus on six core flavors, as 40% of the business is the orange, raspberry, vanilla and blueberry variants, and peach and citrus versions are also strong. Stolichnaya is actually cutting its portfolio. "We have taken eight or nine off the market because the previous owner brought them in to create volume, but if your going to something out today especially with today's consumer you better have a consumer need you are fulfilling," says Esposito.

"If you are bringing it out just because you can make it, don't bother. People have come out with flavors like s'mores, cotton candy, peanut butter and jelly, and bubblegum. They do it to create volume, but those come in and go out." He adds that the campaign is designed to accommodate the whole line of flavors as well as the core Stoli via the strong monochromatic feel of each execution. "The look and feel of this campaign allows us to do it."