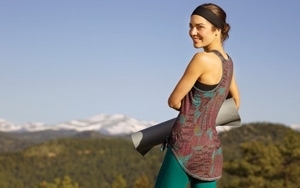 With more Americans dabbling in yoga, and even more just dressing the part, the activity’s wardrobe domination continues. Sports Authority is introducing Bloom, an eco-conscious yoga line with extra emphasis on its appeal as street wear. And the latest results from Lululemon show that brand seems to be bouncing back after recent missteps.

Bloom -- which draws heavily on the outdoors in both its merchandising and imagery -- is designed to specifically appeal to women looking for yoga duds that wear well outside the studio, says Stephen Binkley, EVP and chief merchandising officer of the Englewood, Colo.-based Sports Authority.

“In 2008, there were 17.5 million people participating in yoga in some shape or form. In 2013, that rose to 24 million,” he tells Marketing Daily, “with about 11 million of them practicing once a week or so. So it’s not just about yoga, but about a whole lifestyle.”

The Bloom line is set up in boutiques right near the front door within its 468 stores. And while many of the national brands the store carries -- including Nike and Reebok -- also sell women’s yoga clothing, “we have a little bit of a different influence with our private label, and offer something a little bit different than the specialty stores,” he says.

The apparel is made from fabrics that blend organic cotton and rayon made from bamboo or Repreve yarn, a soft fiber made from recycled materials. And it’s priced from $35 to $70 -- significantly cheaper than such specialty stores as Athleta (owned by the Gap) or Lululemon, where consumers can pay $118 for yoga pants and $108 for a hoodie.

“We have a really good cross-section of shoppers, across all demographics and around the country, and I do believe there is room for yoga as an overarching category.”

He says the store is promoting the new line with print, and through its loyalty programs.

Meanwhile, Lululemon -- stung by a series of management gaffes that included too-sheer yoga pants and subsequent remarks from its founder that some of its customers were too fat anyway -- seems to be regaining its yogi swagger.

"We are pleased to be on track with the implementation of our strategic road map, and are starting to see the results of our work across product, brand and international expansion," says CEO Laurent Potdevin, in its earnings release. "While there is still much to be done, we are making meaningful progress on building a scalable foundation for our next phase of global growth.”