If AAMCO Can Fix Transmissions, It Can Fix Anything 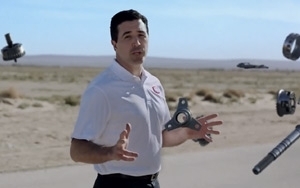 Auto service and maintenance retail chain AAMCO has long been known for its specialty focus on transmissions, and humorous campaigns capped with its famous "Double A (honk) M, C, O" audio tag. But a new campaign takes a more serious, educational tone to deliver the message that AAMCO’s capabilities go way beyond the gearbox.

The effort, touting AAMCO’s Total Car Care Service, takes an approach that might be analogous to the idea that if you can do brain surgery you can probably check someone's eyesight and do an appendectomy at the same time. A second campaign, more humorous in tone, breaks later this year.

The creative, developed by Backyard Productions, takes on the complexity — and anatomy — of your typical transmission. Four new spots, touting AAMCO's Total Car Care with an “800 Pieces” theme (800 being the number of parts, bits and pieces, more or less, in the average car transmission) deliver the idea. In the spot, a technician stands on a lonely desert road talking about transmission, brakes, and the “check engine” light while a floating gearbox behind him comes apart in the air, with a 3D exploding-diagram style motif, thanks to Backyard's CGI wizardry. The gears, gaskets, bolts, shafts, housings, connectors and other guts float away.

As the technician talks, the parts start coming together again with his help. And then the rest of the car comes together, as the technician explains that if AAMCO can fix a transmission, it can handle the rest, from brakes to engine. "It is a departure from where we have been in advertising," says Rob Rajkowski AAMCO's COO. He tells Marketing Daily that the company found from research that AAMCO was not known terribly well for delivering service bumper to bumper.

"Consumers have high awareness for AAMCO in transmission, over 90% awareness, but not as strong for awareness of AAMCO's ability to deliver total car care, so that's why we wanted to make that connection,” he says. He adds that the tone, not just the talking points, was critical. "We felt a humorous spot right off the bat may not convey that. So we looked at different ways to do it."

The company developed the idea with retailer input and its ad agency Qorvis MSLGroup. "We held a roundtable session to look at research, toward an understanding of the right message, and together we saw options and ways to deliver,” says Rajkowski. “Then we approached Backyard and they created the storyboards and commercial. We talked to them about doing CGI that would really engage consumers, pique their interest, while being able to deliver message around complexity and expertise."

The company doesn't do media buys, but allows its dealer network to handle placement, for the spots, which are in 90-second, 60-second and 30-second iterations. The dealer groups participate in coops, where money is pooled for spot media buys. Rajkowski says the heavy-ups, based on retail footprint, will be in markets like New York, Baltimore, Washington, Philadelphia, Florida, and Los Angeles.

Digital is a key part of it in terms of going beyond a TV footprint, with the ads running on AAMCO social sites. "Digital lets us creatively build something that extended beyond TV. We built the campaign with that in mind, says Rajkowski. He says the company is developing a larger digital extension, the specifics of which are under wraps. "We are using social media as well as [channels] under development, so we are not finished yet;  we think digital is something we need to pursue and this fits nicely in it."

ad campaign, automotive
1 comment about "If AAMCO Can Fix Transmissions, It Can Fix Anything ".
Check to receive email when comments are posted.
Next story loading