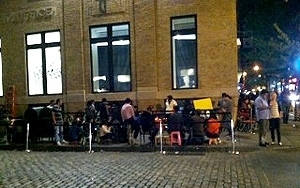 The wrapping-around-the-block lines at Apple Stores right before release of a new iPhone model — and accompanying media coverage — have become a familiar ritual by now. It might be the closest equivalent we have to the Running of the Bulls. The long queues awaiting the arrival of the latest iPhone has become a global phenomenon too, with the scene repeated in Paris, London, Hong Kong, Sydney and New York.

Reports indicate that lines appear even longer than usual this year, partly because of demand in the gray market in Asia because Apple has delayed the iPhone launch in China. Last year, Apple rolled out the new iPhones in China at the same time as everywhere else, but the Chinese government hasn’t yet cleared the phones for sale yet.

In New York, observers noted that Apple fanboys had been replaced at the front of lines mostly by Chinese speakers, a likely result of the iPhone 6 being blocked in China for now and the opportunity for reselling there. While Apple is likely not pleased about the delay, it underscores the demand for its signature product in the world’s biggest mobile market.

How much of a marketing bump Apple still gets from coverage of iPhone Opening Day is a question because the scenes of long lines, the first buyer emerging victorious from an Apple Store with iPhone in hand, and on-the-street interviews with eager Apple customers are hardly novel anymore. Unlike the Running of the Bulls, there isn’t much chance of anyone being impaled, trampled or flung into the air.

In recent years, it’s other brands that have made the most of the frenzy around new iPhone releases, most notably Samsung. The rival smartphone maker scored with its TV ads starting in 2011 that mocked Apple fanboys (and girls) queuing up for the latest iPhone, as well as Apple’s lack of innovation. Samsung more recently reeled off a series of Web videos in the same vein right after Apple unveiled the iPhone 6 and iPhone 6 Plus at a splashy press event last week.

Not surprisingly, carriers have rolled out promotions simply aiming to benefit from demand for the iPhone 6. Verizon, for instance, has said it would give customers a free 16GB iPhone 6 if they traded in an older iPhone model and signed a two-year contract. T-Mobile USA has said it would beat any other trade-in offer and throw in another $50.

Tie-in promotions beyond the wireless industry highlight the role that the iPhone, and smartphones in general, now play in the broader culture. At its upscale Epic hotel in Miami, for example, Kimpton Hotel & Restaurant Group is offering a package including a $200 Apple gift card and free room upgrade for people with a new iPhone 6 booking between Sept. 19 and Sept. 29.

Similarly, the Hyatt Times Square kicked off a promotion today offering a free Prosecco drink to anyone with an iPhone 6 who uses it to take a photo from its Bar 54 atop the building and upload it to #HTSxiPhone6 on Twitter, and tag the location. Sending cots for people to sleep on while they waited in line overnight might have been an even better idea.

After all, MasterCard gave out branded cupcakes and phone chargers to 1,500 people in New York waiting in line this morning for the new iPhone.