Hispanic Millennials, Not What You Think 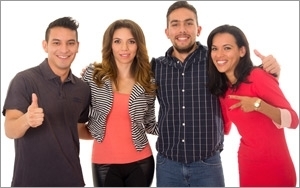 Hispanic Millennials are the second-largest group of Spanish-speaking Americans, and 17% of total U.S. Millennials. And the median age of Hispanic Americans is 27 to 37.

Joe Gutierrez, head of strategic planning and managing director of the agency, shared the stage at Advertising Week with the agency's CEO, Mike Valdes-Fauli, to reveal the findings, among which is that this younger demographic of bilingual, bicultural Americans is very home oriented, with 20% living in multi-generation homes, and they are big spenders, laying out 50% more on CPGs than non-Hispanic Millennials (NHM). In the first quarter this year, car sales grew 13% among the cohort.

"And they have a big influence on family purchase decisions," said Gutierrez, adding that 22% of Hispanic Millennials help with family finances versus 9% of NHM; and they assist elders in their homes with language and with maneuvering the U.S. system.

"So at an early age they are aware of adult issues, and they also have children earlier." And, he said, they view close friends as extended family way more often than do NHM's. The are also entrepreneurial by nature, partly because they are optimistic and already involved in their own households. "Hispanic-owned businesses are growing at twice the rate of the general market," he said.

"Generally, they are more optimistic about their own futures and less doubtful about the integrity of the systems of government, because their parents' nations of origin probably have corrupt governments," he said, adding that they are early adopters, with 54% using mobile, and 40% are mobile-only versus 9% of NHM's.

Brands, he noted, should consider relationships with influencers because HM's over-index for direct contact with actors, artists and brands via social media. "And television is very important," he said, adding that one third of TV viewing time is on Hispanic media.

Valdes-Fauli said because of the strong identity of Millennial Hispanics as bicultural, it's a big mistake to simply address Hispanic marketing language and superficial connections with Hispanic culture when speaking to them. "Sixty-seven percent of Hispanic Millennials want to stand out and be recognized as Hispanic, and close to 70%, regardless of language, are focused on Latino culture and reward brands that acknowledge that.

"Hispanics may resemble the mass market more than the do their parents. In fact they don't resemble their parents much, and they aren't the general market," said Valdes-Fauli. "They were once defined as Hispanic by language and culture, now they are Hispanic by choice. So they shouldn't be an afterthought; but they are at the center of your brand. It's no longer a specialized segment. They are a revenue driver."