Havas, a programmatic pioneer among agency holding companies that created both the first agency trading desk and DMP (data management platform), is claiming another first this morning -- launching what it calls a “meta DSP.’ A DSP, or demand-side platform, is ad tech speak for technology that enables the demand-side (advertisers, agencies or their trading desks) to bid for audience impressions on auction-based exchanges. Havas claims its new version, dubbed Affiperf, is the first to offer brands the ability to do that “seamlessly across multiple demand side platforms.”

“This represents a significant leap forward in what is now called ‘the age of programmatic,’” Havas boasts in this morning’s announcement -- adding a lot of rhetoric, but not many specific details about how it does what it claims, or exactly what the benefit is other than to centralize the process “with one single point of contact.”

Havas bought what likely was the first true DMP when it acquired Artemis as part of its acquisition of Hook Media in 2001. That eventually became the basis for launching Adnetik in 2009, which it 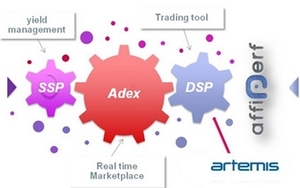 claimed was the first agency trading desk. Adnetik was eventually spun off into an independent “marketing technology company” and re-branded Digilant.

Havas said the launch of Affiperf follows three years of research and development, and that it is launching it worldwide with access to more than 102 markets.“As technology, data and algorithmic complexity have increased, automation in the media industry has become the new norm,” Havas states in today’s Affiperf announcement, adding: “As the number of DSPs in the market exploded, this added a rather frustrating and inefficient complexity to the process of optimization and data collection in programmatic buying.”

“Affiperf will continue to develop the product in the coming months to increase the number of DSP platforms that can be analyzed at the same time,” the company said.
ad technology, agency, dsp, rtb
Next story loading