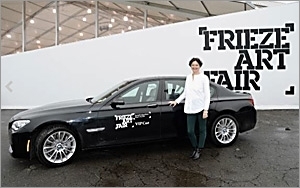 The Frieze events, run by the eponymous contemporary art magazine, are in London and New York, the latter on Randall's Island. BMW, which has been a sponsor of Frieze art fairs for a decade, and the New York programs since 2012, says it has renewed its relationship with the series for another three years.

Other sponsors include title sponsor Deutsche Bank, Bergdorf Goodman, Uovo, The Standard, NeueHouse and Uber. Gucci is sponsoring a program of Frieze talks in London, and BMW has several programs on the ground in both locations.

Frieze London runs from next Wednesday to Saturday in Regent’s Park. At the fair, BMW will present Frieze Sounds 2014, commissioned sounds works, with its cars in the spotlight.

The fair will also have BMW Group Design-created “Double Space for BMW - Precision & Poetry in Motion," an installation that was also at London’s Design Festival 2014. For Frieze, the installation will be at the Raphael Gallery of the Victoria & Albert Museum all month.

BMW is also sponsoring an afternoon tea, no less, on Oct. 13 at the Zabludowicz Collection. The invited guests are the private collectors featured in the custom publication “BMW Art Guide by Independent Collectors“

Also there is BMW Tate Live: Performance Room at the Tate Modern, for broadcast and online streaming.

BMW Group says it has been involved in over 100 cultural partnerships — contemporary art, jazz, classical music, architecture and design — over the past few decades. The automaker has run programs in which artists paint its cars and has had partnerships with the likes of Roy Lichtenstein, Andy Warhol, Jeff Koons, and Zubin Mehta, and the London Symphony Orchestra.