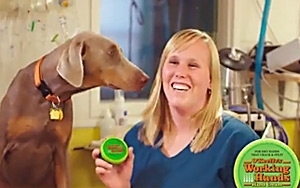 Hoping to make the most of the brutal winter forecasts, O’Keeffe’s Working Hands is skipping the clever sales pitch, and going straight for hardcore testimonials. From the top of the Mackinac Bridge in icy Northern Michigan to large-animal veterinarians to Detroit cops, the company’s new TV campaign focuses on the dramatic thanks the brand routinely gets from happy customers, says McKenna Brooks, director of marketing.

“We have a fantastic testimonial consumer base,” she tells Marketing Daily, “and we wanted to leverage that and bring those kinds of ‘My wife will finally hold my hand!’ stories to life. Rather than go for some witty campaign, we let them talk — the ads are 100% unscripted.”

The product, invented by a pharmacist 25 years ago, wins points with those with severely chapped and damaged hands because it’s odorless and non-greasy. And while it is available nationally and in Canada, “we do much better in cold-weather states,” she says. Because the winter ahead is predicted to be colder than last, she says the Cincinnati-based company wants to intensify that positioning.

While the company has plenty of competition in the dry-hands category, including the quirky Bag Balm, a cult favorite with similarly rural roots, Brooks says she sees it more in line with such products as OxiClean, which has also tied its fortunes to enthusiastic customer endorsements.

And it’s also different in its distribution: Unlike such brands as Nivea or Vaseline Intensive Care, it is sold in he-man destinations like Home Depot and other hardware stores, as well as major food and drug chains. (While 60% of those purchasing the brand are women, she says, it’s used equally by men and women.) And its market research indicates that fans tend to see it as being in a class of its own, with some 91% saying it provided relief from cracked hands faster than other products, and 81% saying it’s unique compared to other brands.

The 30-second and 15-second TV spots are scheduled to appear on HGTV, DIY Network, Animal Planet, Discovery, The Weather Channel, and Fox News through the end of March. And additional print and digital campaigns will support the effort, and focus more closely on the season’s expected lower temperatures.

“We think the appeal is that nothing in the ads is coming from the brand,” she says. “It’s all straight from the consumer.”