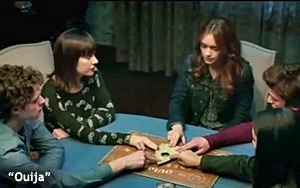 Keeping its recent promise, Snapchat introduced ads to its messaging platform this weekend.

The first ad -- a sponsored story for the horror film “Ouija”-- appeared in the “Recent Updates” section of U.S. users' accounts.

Weird, maybe, but Snapchat didn’t want the ads to take anyone by surprise. As such, Evan Spiegel, the start-up’s young co-founder and CEO, said the ads were coming “soon,” earlier this month.

As promised, the new ads -- which users can expect to see “from time to time,” according to Snapchat -- are opt-in and untargeted.

“You can choose if you want to watch it,” the startup said of its first ad product. “We want to see if we can deliver an experience that’s fun and informative, the way ads used to be, before they got creepy and targeted.”

Just like the content in Snapchat’s "Stories" section, the ads are supposed to disappear after users view them, or within 24 hours.

Also, at least for the moment, Snapchat is promising not to put ads in users’ “personal communication,” i.e., Snaps or Chats. “That would be totally rude,” it admitted.

The effort comes at a sensitive time for Snapchat. Threatening its standing as a secure platform, hackers just recently intercepted hundreds of thousands of private user messages, which they promising to release to the public. Whether the company can weather the resulting storm remains the subject of debate.

Snapchat debuted “Stories” late last year -- a feature that allows users to save and share photos for up to 24 hours. Adding a collaborative component to the service, the startup more recently unveiled its “Our Story” feature, so people at the same events could combine their own “snaps” into a single “story.”

The new ads tie into Our Story, which was introduced to many users during the FIFA World Cup final this year. The service’s entire community was given access to a stream of curated content created by attending the big game between Argentina and Germany.

The company also recently added location-based filters to its growing list of personalization features, which hinted at some big opportunities for brands. Indeed, a video demonstrating the “geofilters” featured users snapping selfies in front of a SoulCycle, a Groundwork coffee shop and Disney World. Suggesting a clear path to promotional initiatives, each location offered visitors branded images to include in their snaps.

Some notable investors have said they expect the anonymous social networking trend to be short-lived. Meanwhile, some industry watchers say Snapchat’s popularity is bad news for advertisers because it represents a turn toward personal privacy and digital anonymity.