Schick Goes Xtreme On The Onion 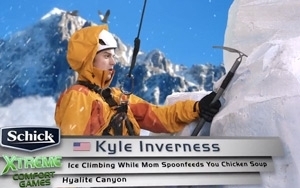 Men's hygiene brand Schick is peeling an onion with a new humorous native content campaign for its Xtreme3 razors. Called "Schick Xtreme Comfort Games," the effort, via Stamford, Conn.- and New York-based agency Beeby Clark+Meyler, extends the brand's "Indisposable Comfort" campaign whose central message is "Your razor is disposable. Your comfort is not."

Tom Beeby, partner and executive creative director, points out that the effort centers on a long-form video on a Schick-branded page on The Onion that also has satirical faux news articles all about comfort, penned by Onion writers. The video itself was written and produced by Onion Labs. The videos show people doing extreme sports

"Our target doesn't care about fancy razor systems with strobes and lasers and 10 blades, but he does care about comfort, so we thought extreme sports was a way to grab people’s attention," says Beeby. He says the agency has often worked with The Onion on behalf of Schick and other clients around custom content the Onion creates on behalf of the brand. "One of our philosophies is that when it comes to influencers, the important thing to do is let them express idea in their own voice if you are going to inject a brand into their environment.”

Beeby tells Marketing Daily that new work will include more content over the next few months with video created by digital influencers. For Schick's mainstay Hydro product, for example, there will be a social video launch over the next two months. "We are active in 'digital Hollywood' with fun, funny, shareable content around brands in voices that are appealing," says Beeby.

Recently, Schick ran a campaign featuring YouTube star/singer Brittani Louise Taylor touting  Schick Intuition razor around the concept of a "ribbon bomb" and a song by that title. The effort, featuring Schick's moisturizing ribbon technology, plays on the yarn bombing craze, where people wrap things in yarn (instead of, say, toilet paper)

"We are tapping into talent as kind of brand stewards and conceptual leads, and we shepherd the whole thing along around this idea of letting them speak in their voice, and that's the key," says Beeby. "You get a content and media buy in one, and as long as you understand the spirit of brand and can be objective, and on message you get results, whether it's completed views, pre- versus post-studies and things like association of terms with brand and product, and sometimes even tracking to retail."