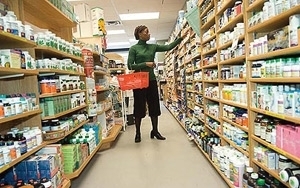 It’s no news that consumers are spending less time — and less money — in traditional grocery stores. But a new report from IRI finds that as value and convenience emerge as increasingly essential, people are making their consumer packaged goods purchases in all kinds of unexpected places. Who knew that frozen foods are one of the hottest categories in dollar stores? That consumers are clamoring for coffee and dog food online? Or that wine is one of the fastest-selling items stocked at the neighborhood drug store?

“At this point, there are something like 2,500 potential paths to purchase, and any number of steps people can take to research their food purchases,” says Susan Viamari, editor, Thought Leadership, IRI. “With so many options and so much noise, it is more important than ever that marketers carefully tailor their products and their programs. To break through all that clutter, they need to resonate with a solid message of value.”

As shoppers continue to shift channels and devices, there is no longer an “average” shopper, she tells Marketing Daily, with some 80% visiting three or more channels to carry out their grocery and consumer packaged good purchase journey.

In the past year, IRI reports that trip frequency and basket size has been flat to declining at both grocery and drug stores. Trips to dollar stores were also flat, but the average basket size increased 3%. And while trips to club stores fell a bit, spending in that channel also grew -- up about 1%.

The way people use these channels is also evolving. For example, shoppers are more inclined to use their trip to Costco and other club stores to stock up the pantry, and they’re more likely to use the drug store for fast “fill in” trips, to grab milk, bread or canned soup.

Grocery stores have lost share in such core departments as refrigerated, general foods and beverages. Mass discounters and supercenters have given up ground in home care and general merchandise. (In both cases, clubs have gained as a result.)

She says certain channels have excelled at making their offerings appealing to important segments. “Younger consumers, for example, view dollar stores in the same way an older shopper might have seen a convenience store. And club retailers have done a fantastic job driving more frequent footfall by broadening their assortment, and stocking more fresh foods and wellness offerings than they used to. Between the increased assortment, the higher-turn product and a strong value proposition, they’ve got a good mix.”

What it all means, both for stores and marketers, is that shopping preferences are “changing so quickly that they can’t afford to get caught up in the status quo. Consumers are more open than ever to buying products in unexpected channels.”