AIMExpo Looks To Be THE U.S. Motorcycle Show 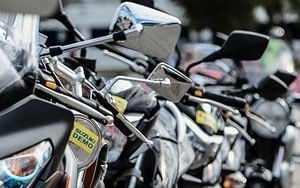 Motorcycle and power sports shows in the U.S. are largely consumer events. What hasn't happened on this side of the pond is the kind of all-in national consumer, press, distribution network, and aftermarket event that typifies what the auto industry does at must-see events like The North American International Auto Show.

Marketplace Events’ AIMExpo (American International Motorcycle Expo) in Orlando last week hopes to remedy the two-wheeled world’s lack of a major show for every constituent. Larry Little, VP of Marketplace Events and general manager of the Motorcycle Group, tells Marketing Daily that several things about the Orlando show are unique. One is its early fall timing.

He explains that spring used to be the ideal moment to dazzle the public with new motorsports products, not just because spring means riding season, but because companies used to debut products six weeks before the season started. "But the industry has changed, and now both the OEMs and aftermarket manufacturers are ready to show products to media and the distribution chain the previous fall."

Until recently, the only show that hit the calendar hot-spot as global product-introduction platform was Italy's Esposizione Internazionale Ciclo Motociclo e Accessori (EICMA) in early November in Milan, the largest show in the world.

Little, a veteran of leading motorcycle vertical publication Cycle World, says that was a thorn in the side. "The thing that drove me crazy at Cycle World was that the number-one Web traffic story was products that had been introduced at EICMA. And there was no platform in the U.S. for manufacturers to unveil them to media here."

He said the AIMExpo idea came from a survey of dealers who wanted something in the U.S. timed with new product roll-outs. "We had lots of information and we knew if we could build a platform that served the three-legged stool — trade show, consumer show, and the media component — we would have something exciting."

The AIMExpo show, In its second year and occupying some 400,000 square feet of the Orange County Convention Center, with a fairly massive outside program as well, also differs from traditional U.S. shows in the venue setup. It offers centralized stages, including a central turntable-stage “media hub,” plus a 1,000-plus-seat theatre, where Yamaha and Kawasaki did auto-show style fireworks for their introductions. This, says Little, is of major importance not just to OEMs, but to an audience of dealers who need a shot of adrenalin. "It was a lot of glitz and glamor to get retailers revved up."

Another standout, and a fairly important one for dealers and consumers, is the ability to test-ride bikes at a large outdoor setup. Manufacturers who offered test rides included Yamaha, Suzuki, Kymco, EBR (formerly Buell), Harley and several ATV and side-by-side brands.

"So you have people going down the line, spending two or three hours test riding. For a magazine like Cycle World, it's the ultimate comparison test. So it's two shows in one."

Little says attendance was double last year's, "and from a consumer perspective we are up 60% to 65% from last year. From the media side we had 15% more credentialed media." He says the first show brought in 392 exhibitors, and this year's show involved 501.

Among other advantages is the city’s airport, with direct flights from 35 global cities. "We now have a large contingent of South American trade visitors; Colombia and Brazil are hot motorcycle markets, so a lot of buying facilities come here to talk to OEMs.

"At the end of the day, it's the trade shows that serve as the engine that makes stuff happen. If I can get manufacturers to do reveals there, it brings down the dealer body and the press. If I open it up for consumers, that's the icing on the cake.”