Well, let me clarify. I finished the marathon. Felt great. Sprinted the final mile and completed it with a very respectable (in my opinion) time of five hours, 11 minutes.

Where I failed was in the social media part of the race. My experiment of writing @jaffejuice on my shirt (my fellow Spin writer and co-author of “Z.E.R.O.,” Maarten Albarda, would have approved) unfortunately produced all of zero tweets, Facebook tags and/or Instagram mentions. 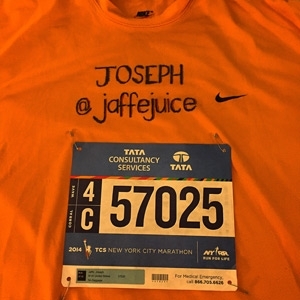 Turns out, when it comes to cheering people on -- encouraging, motivating and interacting with them -- it is more about “social” and less about “media.” As I often say in my keynotes: “The phrase ‘social media’ is an oxymoron. Social is what we humans do well when we interact with one another peer-to-peer, be it in the physical, digital or mobile world; ‘media comes from the word medium, meaning neither rare nor well done.’” (Credit the late comedian Ernie Kovacs with that last part.)

So I failed at the social media part of the equation, but I think I succeeded at the “social” part, thanking all the spectators who called me by name (I also wrote “Joseph” on my shirt in old-school Sharpie), and afterwards, shared some pretty cool images and videos on Instagram (@jaffejuice) and Facebook.

Apple was a winner for me in terms of being able to use my family sharing / iCloud functionality so my family could track me pretty accurately throughout. I also credit Tata Consultancy Services, who put out a new TCS NYC Marathon App that had a terrific tracking feature. Several of my friends and family around the world were using it throughout and posting my progress reports on Facebook.

Elsewhere, Asics did a great activation called “Mini Marathoners” which created 3D-printed statues of 500 runners. This is also probably the biggest disappointment for me (personally and professionally) because obviously I wish I had been one of those runners… had I known about it.

This is in effect the number-one cardinal sin of brands everywhere: the lack of seed and influencer marketing to amplify really great efforts. (Corollary: we do plenty of spray and pray for underwhelming work). Incarnating “Flip the Funnel,” I wonder why Asics limited those statutes to only 500? Why not go for the 50,000 mother lode? Or, bringing in the principles of “Z.E.R.O.,” why not charge for creating the statues? Monetize marketing is the central premise of shifting from a “tenant” (renting media) to a “landlord” (owning assets).

At the end of the day, tentpole events like the New York Marathon are few and far between. While they’re all about active, social presence “in the flesh,” still, organizers and sponsors should pull out all the stops to get maximum bang for their buck. No question that technology innovation will help.

Over time, I do expect innovation to slowly but surely catch up to the pacesetters. Why not have Twitter, Instagram and Facebook integration? With augmented reality, it should be quite easy to identify names of runners as they pass, then capture photos of them and instantly tag them in the process. Yes, this would take away from the official, overpriced photography services, but this is what you call progress.

Incidentally, it also turns out I was using the wrong hashtag the whole time. Instead of #nycmarathon, I should have been using #tcsnycmarathon. Would have helped if someone had communicated that to me.

Of course, I may be nitpicking -- just like the 2.8x surge pricing on Uber afterwards!

P.S.: If anyone knows someone at Asics, I would love a 3D-printed statue if there’s still time. It would complement my Second Life one beautifully -- and I promise I’ll share it via “social” media!