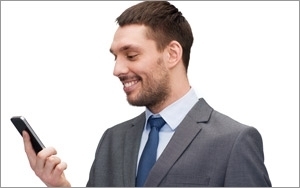 The time spent on mobile devices by consumers continues to drive up the number of mobile searches carried out daily around the world. Mobile searches rely on different functions and technology, such as GPS, and are strongly influenced by features like voice or image search. Visual plays a huge role in mobile search, per BloomReach.

Visual and voice search will become a necessity on smartphones. eMarketer expects visual search to become a mainstream tool for retailers within one or two years. It's already popping up in apps from Neiman Marcus and Dominos. It's also influencing search results.

More than a third of mobile Web search results vary from what consumers see on desktop versions of the same search, with up to a 43% difference in results according to Searchmetrics U.S. Google Ranking Factors 2014 study.

It's a no-brainer, really. Searchmetrics analyzed 10,000 keyword searches, focusing on the top 30 results, and found in the U.S. 36% of Web destination URLs shown in mobile search results differ from those appearing in the results for the same search conducted on a desktop or laptop. On average, 23% were even results from completely different Web sites.

The mobile search engine results pages (SERPs) differ, as well as the URL search results page rank for queries. In the study on specific mobile ranking factors for this analysis, Searchmetrics found that mobile search results for the top 30 positions return, on average, a much smaller file size than for desktop. The content for mobile-optimized pages is often shorter. For users it makes sense to view smaller data packets and avoid longer download times. Mobile optimized sites still climb the rankings, even with a very different backlink profile.

Mobile search results on Google.com tend to include pages with fewer backlinks from other sites than the results for the same searches on desktop and laptop. This makes sense because smartphone and tablet content generates fewer adhoc links, as mobile users are much less likely to link to dedicated mobile pages, preferring to share and like content through social media.

Given the importance of Web site load times as a ranking factor, Searchmetrics also queried the use of Flash. This analysis, new in the report, came as a response to mobile coding in HTML5.