Guitar Center Focuses On The Artist To Build The Brand 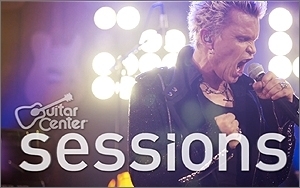 Although the world's largest music retailer, Guitar Center, has been growing its retail footprint aggressively — it recently opened its first New York Times Square store — it is also growing as a music and music content channel, supporting its "All We Sell is the Greatest Feeling on Earth" mantra.

Sponsoring Slash’s trio of Los Angeles concerts this year is one example. But the tentpole is Guitar Center Sessions on directive. In its ninth season, the shows focus on one artist per episode, with each show comprising interviews with the artist conducted by Nic Harcourt, and a performance at a Guitar Center retail venue. This season's roster features 11 artists, including Wiz Khalifa, Billy Idol, Linkin Park, and Cold War Kids. It is global and digital and includes a new partnership via Qello Concerts, where archived episodes are streamed on platforms like Apple TV, Playstation, Samsung Smart, and Xbox. Dustin Hinz, VP brand experience and entertainment marketing, talks to Marketing Daily about the program.

Q: You've been doing this for nine iterations. How has it worked out?

A: It's been incredibly successful for us. We've seen a regular growth in ratings from day one, and I think it's in line with the quality of the work. This summer we did over 15 million tune-ins over three months. For a network in 30 million homes to get those numbers is fairly amazing. It's rewarding for us.

Q: What's the ROI on this? Do you measure it down to in-store sales?

A: It's not a direct-marketing campaign; it's not built to drive immediate sales. It's an incredible brand penetration tool for us: it gets us fans, people who are just passionate about music, amateur musicians, and professional musicians like Slash and Khalifa. And professionals need more support than ever. We provide this outlet for them on a nationally distributed network, so it's an incredible opportunity for us and them.

Q: I noticed you are touting Billy Idol's new album on the Guitar Center Sessions site. Is that a major point? To sell their new releases and products?

A: It's one way you promote the artist. We tag the record, we link to the record in the video promotional materials and we often sell their records in our stores. So we are helping them.

Q: You mentioned you aren't making money with it, but is that in the cards?

A: I think the end game eventually is for this to be a successful business venture for us. We have to make a way for it to be sustainable. It doesn't pay for itself now but as we produce ideas and grow it into additional outlets, documentaries and feature films we'll put more focus on the business element — maybe through distribution, licensing, sponsorship and retail.

Q: What are the KPI’s then?

A: The number-one measurement is ratings, and the viewership has grown a lot. Early on our first Season One, we were doing 1.5 million tune-ins per month; last summer we saw over 4.5 million in June and July each; and in August we got 6.5 million. And when you add in second run and international it's well over 100 million views of this content. And that isn't factoring in digital. Season eight got 554 million impressions. And we are seeing huge media impressions per year via [channels like] Rolling Stone, Billboard, People and Elle. A big part is that DirectTV has let us focus on the art; there's no [branding] "gotcha" moment.

Q: Artists are losing monetary opportunities because of freemium streaming channels. Where does Guitar Center fit in?

A: We are trying to navigate those treacherous waters to be ally of artist and label, and all the people involved in making music. That's our position because if they can't afford to sustain their lives, there will obviously be less and music out there and less interest in music. So we are trying to navigate with them to be partners because have so many stores and so many marketing ability. Finding a way to entrench them in business is critical.