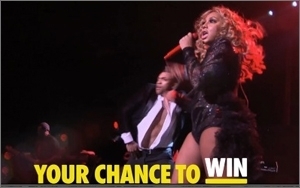 Cable network WE tv will begin an unusual marketing campaign that pushes TV viewers to watch shows within three days of the shows’ original airing.

The promotion, called “Watch W/In,” asks viewers to watch WE tv’s most popular shows — live, on-demand, or time-shifted through DVR recording — and to watch those shows within three days to be eligible for weekly prizes and one grand prize drawing.

“Watch W/In” spots begins airing on WE tv on Monday. Then on Thursday, the sweepstakes part of the campaign launches during an episode of “Tamar & Vince.”

During a commercial break, a specific codeword will be featured within a WE tv spot. Viewers will enter the code word at wetv.com to receive one of 10 weekly “Tamar & Vince” swag bags, then have a chance to win one grand prize — a complete home theater system.

“We know many viewers today want to time shift their favorite shows and watch on their own timetables, but promoting urgent viewing within three days is meaningful for the network and our advertisers,” stated Marc Juris, president of WE tv.