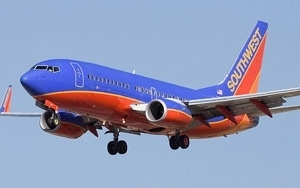 Southwest Airlines is launching a new TV spot Sunday that touts the airline’s benefits for travelers.

Swagger, from GSD&M, plays up “Bags Fly Free,” free inflight Live TV and no change fees. Beginning next year, Southwest will be the only domestic airline that doesn’t charge for bags.

Fifty-three percent of consumers who have gone on at least one leisure trip this past year would consider purchasing a ticket from Southwest next time they are in the market. The airline with the second-greatest purchase consideration, Delta, comes in at 43%, while American and United score at 36% and 35%, respectively.

The airlines are putting more people in seats (and more seats in their planes), says YouGov BrandIndex CEO Ted Marzilli.

“When demand goes up, so do prices, so that may be impacting value across the board,” Marzilli tells Marketing Daily. “That said, Southwest made its mark as being a low cost alternative flying out of secondary airports. Even though they are more of a direct competitor with the big guys today, flying out of more major airports, they still have the reputation for lower fares.”

Even though Southwest lost a little of its value perception since last year, it still has more than double the value score of the nearest competitor, JetBlue. Value perception is measured on a range from -100 to 100, with zero being neutral: Southwest lost four points since the same time in 2013, it still retains a 40 Value score, compared to JetBlue at 17.

Southwest also leads rivals in ad awareness, with 39% of leisure travelers recalling one of their ads over the past two weeks. The airline did a top-to-bottom brand and marketing overhaul this past fall to commemorate its expansion into major hubs, and for the first time, international cities.

1,450 leisure travelers were interviewed over the past four weeks for this research, with a margin of error of +/- 3%.

Out of the 11 domestic airlines YouGov BrandIndex examined, five of them had negative value scores, with Spirit and United coming in lowest at -6. Even though Spirit often promotes fares that are cheaper than its competitors, it is well known for tacking on higher fees from everything from bringing carry-on luggage to charging more add-on fees for the forthcoming winter holiday season.

“Delta, American and United still enjoy almost the same level of consideration at Southwest, even though they lag much further behind in value,” Marzilli says. “It isn’t just about price, although it is mainly about price. Convenience, new planes, routes, nonstop options and frequent flyer programs do matter. Marketers have a lot to work with.”
advertising, airlines, brand marketing, research
Next story loading