Lenovo Pranks Happen In A Snap 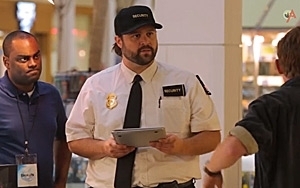 Beware product demonstrators who seem to know what they’re doing, but are in fact just brand pranksters. Lenovo is looking to inject a little fun (or terror, depending on how you look at it) into the holiday shopping season with a hidden-camera video campaign that shows off its product’s flexibility.

Created in partnership with agency DigitasLBi, UCB Comedy (the digital arm of renowned improv troupe Upright Citizens Brigade) and online comedy network Above Average, the prank video is intended to introduce the brand to Millennial consumers who might not be as receptive to traditional advertising, says Bob Cordell, digital marketing manager for Lenovo.

“We’re always looking for new and different ways to get our brand out there,” Cordell tells Marketing Daily. “We do a lot of that other [traditional] stuff. This is a way of fleshing out how we might put something out there. It’s an ad, but it’s not an ‘ad.’”

In the video, unsuspecting mall consumers are lured into a demonstration of the flexibility of the Yoga 3 laptop, which folds back on itself to mimic a tablet. When the demonstrator attempts to fold a Macbook back on itself, it snaps apart. Stupefied, the demonstrator runs away, leaving the bewildered customer facing an angry employee (who was not present before the “demonstration” and has a badge showing off his authenticity as the official kiosk staffer), who demands payment for the broken computer. The manager eventually calls mall security, who gamely suggests having to check the “security cameras” for the missing prankster, revealing the hidden cameras taping all the action.

Lenovo is no stranger to comedic advertising, having produced a satirical fantasy football web series with The Onion over the past two years. Cordell admits that hidden-camera, so-called “prankvertising” could have an adverse effect on viewers (who might sympathize more with the pranked than the prankster), but feels the potential resonance with younger consumers (and that the prank is mostly harmless) is worth the risk.

“We definitely recognize people will [view] this in different ways, just as we recognize there are passionate supporters of other people’s products,” Cordell says. “But we hope to do this in a way that we’re upfront about it. We’re not trying to pull a fast one.”

The effort, which will run on Above Average’s comedy network and through Lenovo’s social channels, is specifically timed to take advantage of the holiday shopping season, Cordell says. “People are going to be familiar with malls over the next few weeks,” he says.