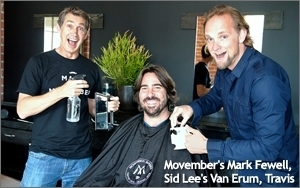 Ad shop Sid Lee is expanding to Los Angeles and will share space with the Movember Foundation, the nonprofit focused on men’s health issues. The agency does pro bono for the foundation.

The Los Angeles office will be led by managing partner Nicolas Van Erum. In addition to Movember, the office will lead work for clients including Adidas, Facebook, Intel, 99 Cent Only Stores, Stanford University and Cirque du Soleil, which owns 20% of Sid Lee.

The launch of the LA office comes two years after the agency opened its first U.S. operation in New York.

The shop was founded in Montreal 20 years ago and also has offices in Amsterdam, Montreal, Paris, Toronto and Calgary.

"We have been searching for the right opportunity to launch our presence on the West Coast for six months now," said agency co-founder and senior partner Will Travis. "After several conversations with the executive team of The Movember Foundation, we decided supporting the charity was just the right way to land, extending the agency's 20 year belief in investing our strategic and creative resources behind causes where hiring an international agency partner just wouldn't be viable."

The agency also has an architecture practice and recently was awarded assignments for two residential developments in Venice Beach, CA. A production team at the agency also recently completed the feature documentary “Takedown: The DNA of GSP” about a former UFC champion Georges St-Pierre.