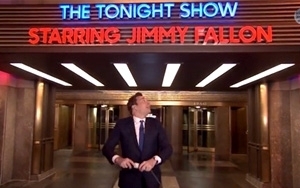 NBC’s marketing for its big late-night program gets a bump with a marquee for “The Tonight Show Starring Jimmy Fallon.”

The new sign is now atop the 6th Avenue side of 30 Rockefeller Plaza -- the first marquee of its type ever at the famed New York City building.

NBC says the placement of “The Tonight Show” marquee is part of the previously announced plan for extensive upgrades and enhancements to historic 30 Rockefeller Plaza.

John Wallace, president of NBCUniversal Operations and Technical Services, said in a statement: “Showcasing our iconic NBCUniversal programs and talent, plus improving the fan experience, are key elements of our comprehensive building redesign project.”