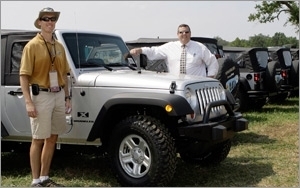 Black Friday could put the auto business right over the top, creating the best November in well over a decade for a resurgent category. Several groups are looking at strong numbers. Several forecasters see big increases this month.

Cars.com sees light vehicle sales hitting around 1.3 million, a 3.4% increase versus the month last year, and a slight uptick from last month. The online shopping and research site says it will be the highest November unit sales count since 2001, and the highest seasonally adjusted annual rate since 2004.

Jesse Toprak, the head of industry analysis at the company, said much of it is thanks to year-end clearance deals for current-year cars and trucks, as automakers prepare to roll out the '15's, and "relatively lower gas prices and an excellent selection of cars and trucks propelled the sales rate to its highest level in a decade." Also good news: retail will be 85% of total sales this month, 1.1% year-over-year and 2% from October, per the firm.

Says Dave Winslow, VP of digital strategy at automotive enterprise software company Dealertrack Technologies, “Dealers are getting aggressive and taking advantage of Black Friday promotions because consumers are already out shopping and it alleviates pressure to get them on the lot in December for year-end sales." He tells Marketing Daily that mobile traffic across the Dealertrack platform increased 53% leading up to Black Friday this year, versus last year. And the total traffic across Dealertrack last year was 7% higher in the two weeks after Black Friday than the two weeks prior.

J.D. Power sees a strong weekend, with more than 238,000 rolling off dealership lots over the Thanksgiving holiday. That, says the firm, would make it the second-highest-volume holiday weekend of 2014. Labor Day weekend typically tallies the most sales of the year, with 279,000 units sold in 2014.

Kelley Blue Book's estimates are just a tad more conservative, at 1.27 million units. Said Alec Gutierrez, senior analyst at the digital automotive market: “Black Friday vehicle deals should have a large impact on sales and make the final weekend of the month a busy one…shoppers continue to return to the dealership as economic conditions remain favorable, with the unemployment rate at its lowest in six years and with consumer confidence nearing pre-recession levels.”

The firm says Fiat Chrysler will continue the trend of having steeper sales growth than any major manufacturer, lead by Jeep. Chrysler's looking at a 12% year-over-year increase, with Jeep growing a huge 46% year-to-date. Kelley Blue Book speculates Honda is also poised for a strong month heading up 4%. "Sales of core products (Accord, CR-V and Civic), remain healthy," says the firm. The firm also sees pretty good numbers for Nissan this month, with a predicted 3.3% gain. The only negative predictions are for Hyundai and Kia, which KBB.com sees dropping 3.4% this month, and Ford, which will drop about one percent versus last November.

From a segment perspective, sales of small SUVs and crossovers are turbocharged. Kelley Blue Book sees no end in sight, with double-digit increases this month. The firm says half of the models in the compact SUV world have already surpassed 2013 sales totals. Also strong for the month and year-to-date are full-size trucks with KBB.com predicting a 9.5% increase this month versus November last year.