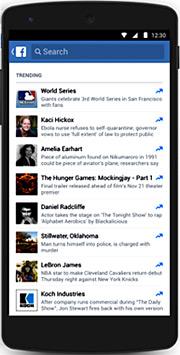 Facebook this week is bringing “Trending” to mobile, and adding some very Twitter-like features to the still-new service.

When Facebook debuted its Trending section at the beginning of the year, it gave users one less reason to leave its platform in search of fresh news on Twitter or any news site. It was designed to increase the time that users spend on Facebook, and further establish its platform as the Web’s official gateway.

Beyond users’ immediate social networks, Facebook increasingly sees itself as a hub for connecting the entire world. More and more, “people gather on Facebook to talk about what’s happening in the world,” Diana Hsu and Andrew Song, product managers at Facebook, explained in a co-authored blog post published on Wednesday.

Now, when users tap on a topic in the Trending section, they will see conversations organized in up to five different sections, including “articles,” “in the story,” which shows posts from people who are part of trending stories, and “friends and groups,” which displays what people within their networks are saying about trending stories.

In addition, a “near-the-scene” vertical shows posts from people who are geographically near a trending story, while “live feed” displays a real-time feed of reactions from people around the world. Considering that the latter feature is a pretty accurate description of Twitter, it should be a concern for Facebook’s biggest social rival.

For Facebook, the change is part of a broader effort to increase the relevancy of its content. When deciding which News Feed posts to show to which users, the company recently began giving greater consideration to timeliness and activity-based relevancy. Per the changes, users are now more likely to see “trending” stories in their News Feed -- but only after a “friend” expresses an interest in such a story.

The changes come at a time when social networks are actually declining as engagement platforms, while brands and publishers are seeing audience engagement rates rise on their dedicated digital properties.