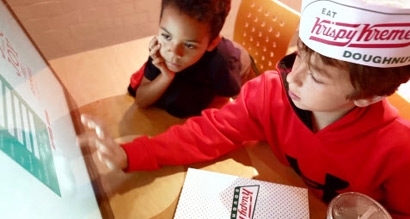 For the holidays, Krispy Kreme is offering its customers around the world the opportunity to live video-chat with one another through tech set-ups in its stores.

Computers using Google Chromebook can connect up to 15 in-store guests at Krispy Kreme shops in 16 different countries via a two-minute live video chat on a customized page.

The interactive in-store experience, dubbed "The Joy Goes Around Holiday Hangouts," is available at participating shops in the U.S., Canada, Mexico, Colombia, the Dominican Republic, U.K., Turkey, Russia, India, Singapore, Thailand, Philippines, Taiwan, Japan, South Korea and Australia. It kicked off in the first week of December, and runs through Jan. 5, 2015.

During the video chats, participants see prompt messages encouraging them to do things like wave their hands, show off a donut, or make a toast with their coffee.

“We wanted to do our part in spreading the joy this holiday season, by helping our fans around the world send and receive good cheer and celebrate the things they have in common, no matter where they live,” said Dwayne Chambers, chief marketing and information officer at Krispy Kreme.

In addition to creating good will, the live experience was designed to help drive traffic to the shops during the holidays, when Krispy Kreme is offering seasonal donuts.

The video is posted on Krispy Kreme's YouTube channel and Facebook page (and has garnered nearly 5 million "likes").

A link to the video will be shared on throughout the campaign on Google+ and on Twitter (@KrispyKreme, 144,000 followers), with #joygoesaround.  The brand reports that it's also made a small Twitter advertising buy.

On its Instagram account (129,000 followers), photo stills from the video chats will be shared via #HolidayHangouts and #joygoesaround.

Krispy Kreme's international franchise partners will also use social media channels in their own markets to drive awareness of the Hangouts, using the promotion's two hashtags.

In addition, Google is supporting the effort via a Google For Work blog and posts to its readers.

Other support for the campaign includes in-store wall displays and tabletop materials and public relations.