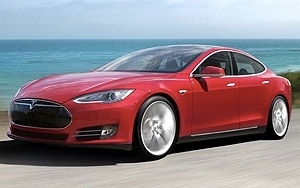 Visionary, inspiring, bold and exciting. How many brands have that "vibe" in the argot of WPP global marketing consultancy Added Value?

Amend that. How many global brands? Suddenly the list gets real short. If you count Tesla and Etsy as global brands, competing with companies like Coca-Cola, the list expands by two.

In Added Value’s new report, "The Cultural Traction 2014," Tesla is, in fact, on the list; in fact it is on top of the list, above second-place Google. The only other automaker in the top is Ford, in ninth place after Nike. Ford, the firm says, surpasses other mainstream auto brands because of its sophistication around social media and telematics/infotainment, and its perspective on the car as a rolling media center.

The biggest gainer on the list, auto brand or otherwise, is Jaguar, partly because of the British Villains "Good to be Bad" marketing campaign and its revitalized vehicle lineup. The agency says Target’s data breach and the ousting of its CEO made it the brand that dropped the most in its list.

The firm says the brands that are on top of the vibrancy list deliver "Purposeful and compelling visions for positive change, establish "Truer, deeper, more lasting connections with people; and enrich brand experiences to be more open-ended and on-going."

With Coca-Cola, the key is stylishness, with its Ekocycle collaboration with Will.i.am. Nike's FuelBand, the firm says, opened up a market for wearable technology designed to boost self esteem and encourages and measures activity.

On the bottom, United and American have lagged in innovative customer service. Sprint and T-Mobile have raced to the bottom because of aggressive marketing around plan packages and deals, but without, emotional resonance, per the firm. Despite efforts to reach families and Millennials, "their cultural expressions don't feel genuinely attuned to consumers who might actually wish for an alternative provider."

Budweiser, Heineken and Corona are flat because, per the firm, they haven't tapped emergent values around sensory experiences, conscientious choices and new ways to foster connections.

Twitter seems to lag in areas that don't have to do with breaking news, the firm says. "By design, most content is fleeting, and therefore forgettable, making it tough to build value."

In the study -- involving 7,500 U.S. respondents and 70 brands in 14 sectors, and executed by Lightspeed Research -- Amazon’s ranking rose 10% because, said the firm, it has expanded into cell phones, and of course drones. Apple, on the other hand, has slid from No. 1 four years ago to fourth place -- just in front of Samsung, which is on the rise.

Peer-to-peer e-commerce site Etsy is at number seven for having ridden the Millennial maker-economy wave. Etsy kicks eBay from the top-10 list, per Added Value, because it has a brand experience that is "more real, personal, and fun."