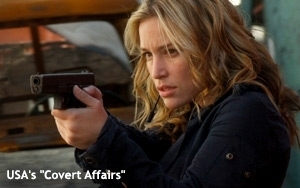 Comcast’s own NBC and USA Network will start with the launch -- posting the current season of TV shows, which will expand to other Comcast On Demand programming. Comcast says the app is “completely free” to Xfinity TV customers.

First shows include full current seasons of USA’s “Covert Affairs” and NBC’s “Chicago Fire.” NBC's “Parks & Recreation” will come in February 2015. Comcast had said it would start up 4K TV by the end of this year.

Comcast says that next year, Xfinity in UHD catalog will be distributed across Xfinity TV Go, as well as distributing a new X1 set-top box for 4K content.

Last month, DirecTV became the first U.S. pay TV provider to announce a 4K library — with a limited offering of 30 titles to be distributed on a pay-per-view basis. Netflix started up offering 4K TV movies this year. In addition, Amazon has said it would begin to offer 4K content.

A new study says global shipments of 4KTVs climbed over 3 million for the third quarter of this year — now totaling 6.4 million units shipped for the year, according to IHS’ DisplaySearch.