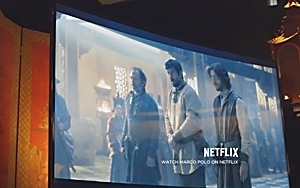 Everyone wants to be ruler for a day. In another bid to link its online and offline experiences, Samsung Electronics has given one person the chance to live like a king (or an emperor) for an afternoon.

As a tie-in with the new Netflix series “Marco Polo,” Samsung treated blogger Andrew Steinthal (co-founder of The Infatuation blog) to a once-in-a-lifetime experience to be “Kublai Kahn for a Day.” Earlier this month, the brand took Steinthal to an epic viewing experience, catering to his every whim and desire.

A video of the experience depicts Steinthal getting picked up at his New York apartment and driven to a special location where he’s treated to a meal from Michelin star-winning chef Michael White, and screening the series on a Samsung curved 4K TV, which is gifted to him as well.

“Since the show is a new show, we needed to take a different tack [from previous efforts], but we wanted to keep that same flavor of surprise and delight,” Peggy Ang, vice president of marketing communications at Samsung Electronics, tells Marketing Daily. “The theme was ‘Being Epic.’”

Unlike the brand’s previous promotion, which involved sending street teams this Netflix promotion needed to take a more focused approach.to people mentioning the brand during the Emmys telecast, the “Marco Polo” effort narrowed the impact to one person with a large Internet following, Ang says.

“We picked Andrew because he exemplifies the characteristics of what we think the Samsung consumer aspires to be,” she says. “This was not about, ‘How can we reach as many people as possible?’ We wanted to reach the right consumer with the right mindset.”

“‘Marco Polo’ is an inherently massive production. Those are the hallmarks of showcase the value of 4K,” Ang says. “Netflix has [also] been a great partner of Samsung and 4K streaming.”