What The Networks' Christmas Eve Programming Reveals About Them 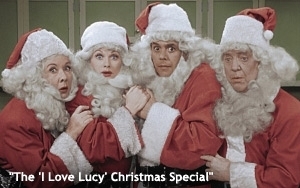 What’s on TV Christmas Eve? That depends on the network.

It’s always been one of the year’s oddest evenings for TV because it’s the one night of the year when the three hours of prime time serve as a lead-in to, well, Christmas itself.

In fact, where TV is concerned, Christmas traditionally arrives like clockwork every Christmas Eve just after the local TV news, when a number of stations revert abruptly to religious programming -- the only time of the year when TV turns its talent for “live-event coverage” to beaming church services into your living room.

But in the hours preceding the midnight masses, Christmas Eve is anything but a “silent night” on TV. This year, the prime-time schedules on the four networks seem to represent an ambivalence about the onset of Christmas. Or perhaps their schedules merely reflect the fact that they don’t expect many people to watch anyway, so why try?

Let’s take a look at what’s on TV Christmas Eve, network by network, to see if we can learn anything about how the networks view Christmas.

NBC is the only one of the Big Four to schedule one event for the entire three hours of prime time on Christmas Eve this year. It’s the 1946 movie “It’s a Wonderful Life.” Wednesday’s presentation will be the second for this movie on NBC so far this holiday season. The first was back on Dec. 6.

With “It’s a Wonderful Life,” NBC seems to be saying: We feel that we’ll get so few viewers on this night of television that we might as well put on this old black-and-white movie -- the only black-and-white programming of any kind that we would dare put on ever. Oh, and by putting this thing on for three hours, we only really need essentially one guy to come into work tonight to turn a switch on at 8 and then off at 11.

Or, to be more generous to NBC, it’s the only network that is devoting its entire prime-time lineup on Christmas Eve to a single presentation suitable for the entire family. Maybe what NBC is really saying is: Merry Christmas.

CBS: Black-and-White? Are You Kidding?

Speaking of black-and-white, CBS isn’t even reverting to black-and-white when showing two episodes of one of its most beloved black-and-white series. CBS’s prime-time lineup on Christmas Eve starts off with two back-to-back colorized episodes of “I Love Lucy” -- a special Christmas episode first, followed by the famed candy assembly-line episode, which has nothing to do with Christmas. CBS will follow these two “Lucy” episodes with repeats of “Madam Secretary” and then “Scorpion” -- both of which center on terrorist plots (one of them nuclear).

With this lineup, CBS seems to be saying: We love “Lucy,” but not enough to honor its position as the most revered comedy series in the history of television by showing it in its original black-and-white form. Who do we look like? NBC? As for the other two shows, we understand they don’t exactly shout “Christmas Eve,” but what can you do?

ABC: A Festivus For The Rest of Us

Let’s say you’re not particularly interested in Christmas-themed programming on Christmas Eve. If this sounds like you, then ABC’s lineup of six, half-hour sitcoms is for you -- except for a single episode of “Black-ish” at 10 o’clock about a black Santa Claus. The rest of the evening’s lineup consists of half-hour comedies whose plot descriptions don’t acknowledge the holidays at all.

Fox: Someone Buy This Network a Calendar

With its Christmas Eve focus on Halloween, Fox seems to be saying: We give up. See you after the holidays.