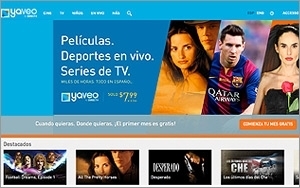 DirecTV continues to bolster its digital Spanish-language offerings with the debut of Yaveo (from ya veo, “Now I see”), a new over-the-top streaming video service carrying Spanish-language entertainment programming.

The service is available to anyone with an Internet connection, at a cost of $7.99 per month. No contract or DirecTV satellite subscription is required.

Yaveo customers will get access to a wide variety of programming, including content that is frequently hard to find, as well as shows exclusively available on Yaveo, ranging from movies to children’s programming and telenovelas.

Customers will also be able to stream live sports and entertainment channels like beIN Sports en Español, Cine Sony Television and ¡Hola! TV, among others.

Among other capabilities, Yaveo will allow viewers to start watching on one device, pause and then switch to another device to continue viewing. They will also be able to stream Yaveo on two devices simultaneously.

It’s been a busy year in the U.S. Hispanic video marketplace. In October, Spanish- GoTV merged with Latin Anywhere, which owns the rights to thousands of hours of Spanish-language film and TV programming, forming a new company called Latin Everywhere.

In September, Comcast and Univision Communications struck a long-term deal under which Comcast provides Univision Deportes to XFinity TV subscribers who opt for the Digital Preferred or XFinity Latino cable packages.

In August, MiTú, a digital video production company and network targeting Hispanic millennials, announced a multiyear collaboration with Televisa, a Mexican company, for joint production and distribution of digital video across a variety of formats and platforms. In July, Telemundo struck its own production deal with Sony Pictures Television, to produce three new prime-time series over the next three years.

In May, Olympusat introduced 35 new HD networks targeting U.S. Hispanics with an array of Spanish-language programming from across Latin America, including Mexico, Venezuela, Chile, Honduras, and Puerto Rico. And in January, Hemisphere, a media company that targets U.S. Hispanic audiences, acquired three Spanish-language cable TV networks serving the U.S. as well as abroad, from their previous owner, Imagina’s Media World, for a total of $102 million in cash.