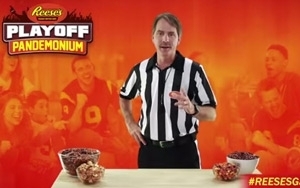 The Hershey's candy brand, which sponsors several college football events, has created a series of 11 short videos in which  Foxworthy, dressed as a football referee, demonstrates humorous "Reese's Rules" for successful game-day parties. For instance, the rules state that "tackling is permitted when someone grabs the last Reese’s Miniature" and that "pass interference may be called for not sharing your Reese’s Minis."

The Hershey's candy brand will promote the videos on its social channels (including Facebook and Twitter) throughout the college football playoff season, and ask fans to share their own entertaining rules or images using the hashtag #ReesesGameday. All of the videos can also be viewed on the brand's YouTube area.

In the in-store element of the campaign, fans can SMS text to opt in to receive additional rules from Foxworthy and a coupon for future Reese’s purchases.

The campaign also has a dedicated area on Hersheys.com.