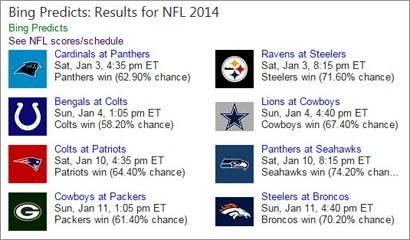 Moving closer to Super Bowl 2015, Microsoft's Bing algorithm for its search engine took on forecasting National Football League games, posting NFL game predictions in search engine results. The listings posts game matches and times, along with a list of the teams that Bing predicts will win the games. As the industry draws closer to the Super Bowl, marketers will want to know how -- and whether their advertising campaigns will score big.

Now Microsoft Cortana has moved into predicting NFL games. Cortana, a Windows personal assistant, uses Bing predictive algorithms to predict every NFL game this season. Reports suggest that it picks games "straight up," rather than against point spreads.

"While it hasn't been as successful as the Bing algorithm that correctly predicted 15 of 16 games in the World Cup's knockout stage, it was still pretty good," per Business Insider. "Cortana had a nearly identical record to the Las Vegas betting favorites, which went 168-84-4 (66.4%). Nate Silver's ELO model beat Cortana, going 176-80 (68.9%)."

Can Bing use its algorithm and data to determine the big winners in this year's Super Bowl advertising lineup, not just for television, but search engine marketing and social media? Viewers will see some old favoriates, per reports.

An Anheuser-Busch spokesperson told The Wall Street Journal the famous Clydesdale horses will make an appearance in Budweiser's Super Bowl ads, and GoDaddy will head in a new direction with feature a puppy as its main character.