Believe It Or Not, 'American Idol' Is Back For Season 14 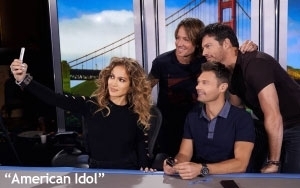 You can hardly blame Fox for continuing with “American Idol,” which starts its 14th incarnation on Wednesday night.

The show is the mother of all talent-reality shows, and Fox must figure that if NBC can do so well with one of the “Idol” offspring -- “The Voice” -- then the original may as well continue too.

The current panel of judges -- all music superstars -- creates an entirely different chemistry than the triumvirate that once made “Idol” the biggest phenomenon on television. The current judges are so well-known that the contestants who come to audition for them are in awe of them. They’re the kinds of entertainment stars that all of the “Idol” contestants aspire to be.

Not so with Paula, Simon and Randy. At the outset of “Idol” in June 2002, Paula was the best-known of the judges, and she was, at the time, at least half a has-been (if not more). Randy was a bass player, most notably for the rock group Journey, but he was almost a complete unknown. And no one knew who this guy Simon was either. The fact that they gelled so spectacularly (especially Simon and Paula) was pure luck.

Nowadays, “American Idol” is an institution. And the young hopefuls whose auditions are seen from various cities in the first few weeks of a new season (including this Wednesday’s premiere from Nashville) are starry-eyed idol-worshipers in the presence of Keith, J-Lo and Harry.

On Wednesday’s show, one clean-cut farm boy with a guitar asks to slow-dance with J-Lo -- accompanied by Harry Connick on piano and Urban on guitar. Harry and Keith feign reluctance -- but, aw shucks, they eventually say yes. This particular portion of Wednesday’s episode is so painfully awkward and phony (not to mention, over-long) that it is almost unwatchable.

Another contestant, a young woman from Mississippi, informs Keith Urban that her mother loves him, and insists that her mom be invited into the audition room for a hug. Keith obliges, after conferring with his fellow judges -- another segment that will have you glancing at your watch in disbelief at the time this interlude is sucking up in this one-hour show.

In this year’s “Idol” premiere, there is less of an emphasis on auditioners who make complete asses of themselves. For many years, these delusional types comprised most of the hopefuls seen in the early episodes of every new season. These crash-and-burn auditioners were usually the most talked-about characters on the morning after their appearances.

More recently, however, “Idol” seems more interested in emphasizing the contestants who reveal at least enough talent to squeak by to the next round. On Wednesday’s premiere, these include a young woman seeking to escape from her violent Memphis neighborhood, and a barista from a Nashville coffee shop across the street from the auditions. Such are the stories that pass for heartwarming on “American Idol” these days.

One of the few unsuccessful auditioners on Wednesday’s show is a would-be (and self-proclaimed) singer-dancer who still thinks Mariah Carey is one of the “Idol” judges.  For this “crime,” she is put up for ridicule. How dare she confuse J-Lo with Mariah!

Another hopeful -- a 15-year-old girl from Florida -- insists on the show that Ryan Seacrest “spoke to her” through her TV set and told her to audition for the show. And yet, despite this claim, she turned out not to be a nut. Instead, she was the most promising contestant seen on the whole show -- proving that “American Idol” is still capable of surprising us.

celebrity, entertainment, music, tv
1 comment about "Believe It Or Not, 'American Idol' Is Back For Season 14".
Check to receive email when comments are posted.
Next story loading