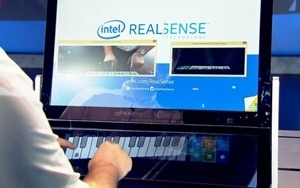 Google has been pushing into wearable technology, robotics and self-driving cars, but it may be no match for Intel. At the Consumer Electronics Show Tuesday, the semiconductor giant announced a slew of innovative technologies that puts it firmly in the lead with processing power the size of a small button. It also showed off a holographic display powered by RealSense. The idea is to go beyond the touchscreen and allow consumers to interact with virtual objects.

During the keynote, Intel CEO Brian Krzanich announced Curie, a low-power hardware module that engineers can use to build wearable devices like rings, pendants, or glasses. It uses a new version of Intel's Quark chip, the Quark SE, so small that it's capable of being integrated into tiny form factors the size of a small button.

Intel hopes engineers will use Curie, a system-on-a-chip, as a building block. It uses Bluetooth and includes a low-power sensor hub, a pattern-matching accelerator that allows for accurate gesture recognition, and six-axis combination accelerometer and gyroscope. The company will make the module available in the second half of 2015.

Krzanich said 2015 will be the biggest turning point since 1995, when search engines emerged to give birth to ecommerce. This year the industry will move from a two-dimensional world into three dimensions -- and it will change the way people experience computing.

True Key is supported on iOS, Android, Windows, Mac, and across most browsers. It will also be preinstalled on devices from HP and Lenovo and a part of McAfee LiveSafe in the coming months.

Krzanich also announced new applications for Intel RealSense cameras in robots, collaboration with iRobot, and flying multi-copter drones. Until now computers were defined with a screen and a keyboard, with flat surfaces, but computers will gain senses with the ability to understand events and adapt to change.

Through cameras, Intel's RealSense technology senses depth. Microsoft Kinect was the first introduction of this type of technology that interacts through voice and gestures. Now Intel will make it available in tablets and laptops from Acer, Dell, NEC, and others. It also will make the technology available to integrate into robots.