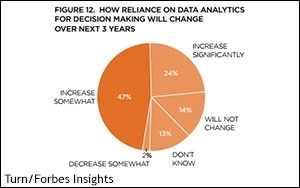 Advertisers that have taken to data-driven marketing are nearly three times more likely to see revenues increase as a direct result, compared to those that have been slower to adopt Big Data as part of their marketing mix, according to a new report from Forbes Insights and Turn.

There is also an edge in customer engagement and loyalty, as 74% of leaders believe they have achieved a “competitive advantage” in those areas, compared to 24% of laggards.

“We’re layering it on what we already have,” Janice Ross, VP of brand marketing at American Greetings Properties, is quoted as saying in the report.

The most common data collected, per the report, is demographic. Behavioral data, online transaction data, sales leads and social metrics are all among the most collected pools of data.

Analytics go hand-in-hand with data-driven marketing, and the survey found that marketers are expecting to increase their reliance on data analytics for decision making over the next three years, as well.

Nearly half (47%) say they expected to “somewhat” increase their reliance on data analytics for decision making in that span, while 24% says they expect a “significant” increase. Only 2% expect a decrease, while 14% won’t change and 13% don’t know.

In a similar vein, the majority of respondents (60%) expect to increase their spending on data-driven analytics over the next three years.

“There’s really very little excuse in today’s marketing department to not use data,” Russell Glass, head of B2B product at LinkedIn, is quoted saying in the report.

The report, due for release on Thursday, can be found here.