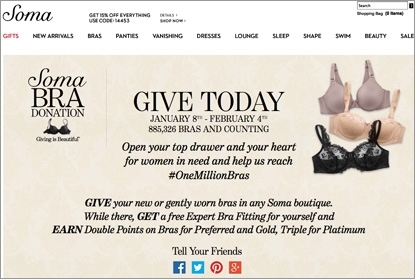 Soma Intimates is kicking off its national charitable effort of collecting bras and donations for women affected by domestic violence.

The bi-annual initiative -- which has collected 885,000 bras in four and a half years -- is the largest of its kind, says the company. The company hopes this campaign will drive the total over the one million mark.

Via its “Giving is Beautiful Soma Bra Donation” promotion, the company will accept both new and gently worn bras through Feb. 4 at all Soma boutiques across the country as well as monetary donations at the register and online.

What started as a grassroots effort in a few local boutiques has grown to become a brand-wide and nationwide initiative spanning more than 281 Soma boutiques and outlets, says Laurie Van Brunt, president of Soma, a division of Chico's FAS, Inc.

The donation initiative is national in scope but local in nature in that it directly impacts communities where the bras are donated. Each boutique will work with its community's women's shelter to help local women in need.

“Our boutiques and customers enthusiastically contribute their time, money and bras to help women in need restore their lives,” Van Brunt said in a release. “It's our ultimate goal that no woman has to choose between buying a bra and putting food on the table."

To help raise awareness about domestic violence, Soma will once again partner with the National Network to End Domestic Violence. The NNEDV is the leading voice for survivors of domestic violence. Representing over 2,000 shelter programs across 56 state and territory coalitions throughout the United States, the NNEDV continues to be a vital partner to help spread the word and make a difference in women's lives.

Soma is using the hashtag #OneMillionBras in its marketing and social platforms during the donation time period, and is asking customers across the country to help spread the word by tweeting about it and tagging @SomaIntimates.

The brand will also have a donation landing page allowing visitors to read stories about how the donated bras have changed women's lives, plus offer information about the NNEDV, how to donate bras and where to find Soma boutiques nationwide.

The donations make a real difference in the lives of domestic violence victims, who often arrive at a shelter with nothing, says Kim Gandy, President and CEO of the National Network to End Domestic Violence.

New and nearly new bras are less frequently donated than other clothing items, so shelters are especially grateful to receive these donations, Gandy adds.