Colorado, The Truck For Urbanites Longing To Be 'Let Loose From The Noose' Of Boring Cars 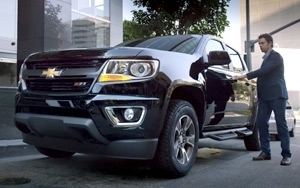 Okay, it’s actually a Cadillac that gets mentioned in AC/DC’s “Back in Black,” but for Chevrolet’s new ad for its Colorado mid-size pickup, the song is emblematic of everyman’s desire to get his cojones out of the freezer. While Will Hoge’s country music single "Strong" is the theme in ads for Colorado’s big brother Silverado, the AC/DC anthem, one of the top-selling songs of all time, is backing Colorado in the new ad. Not a bad choice: Angus Young is smaller than the average rock star too.

Shot in L.A., the new ad, via McCann Worldgroup, shows a Walter Mitty-type guy pulling up to work in a grey, dated, Japanese compact car. As he tramps into his office building, he passes a band of street musicians playing the Carpenters. When he exits the elevator at his floor, another guy enters -- a cool, more assertive type. When that guy exits the building, the band is playing an Americana/roots version of "Back in Black." He jumps into a black Colorado and drives away as the real song takes over.

"What we want to show is that there's this inner truck guy in everyone," says Sandor Piszar, Chevrolet's director of truck marketing. "There's a latent desire among a lot of people to own a truck.” Just not a big one. He tells Marketing Daily that mid-size truck buyers are actually more likely to have more in common with car owners. "Definitely there are two different guys [in the ad], but with a similar profile."

There are different versions of the new ad — a :30, which starts Jan. 31, and a :45 paired with an additional :15 second reprise that will follow in a couple of weeks, per the automaker.

Is there opportunity? Well, the mid-size truck market has definitely been stagnant for years, at about 265,000 units annually, per Piszar. That’s largely because the product pipeline is essentially dry. "But at one point in the ‘80s the industry sold more small trucks than full-sized.”

The only game in town for a decade or so has been Toyota with the Tacoma and Nissan with the Frontier, but they haven't significantly updated those vehicles in years. Ford Ranger and Dodge Dakota are out of the market. Toyota, however, is showing a totally new Tacoma in Detroit next week. Colorado recently won 2015 Motor Trend Truck of the Year honors.

Piszar says up-to-date technology and modern design will bring people back to the segment. “We have talked to customers who left the segment because they were looking for more refinement, higher levels of technology, space and better efficiency, generally a more modern package." The base-level Colorado, around $20,000, comes with cameras, six-speaker audio, and power seats.

He concedes that it's unlikely that mid-size trucks will return to the volume they enjoyed in their heyday, less because of the allure of new full-size trucks than because of the sheer number of choices consumers now have among the panoply of crossovers and SUVs in the market today. "But for those looking for functionality you can only get in a trucks, in terms of power, efficiency, payload and towing, but in a small package, there's a big opportunity for us."

The company kicked things off last year with a digital and TV effort where different groups of real people were shown images of a sedan and a truck to get their authentic responses. The TV spot shows their reactions when they get to see the truck, along with the male model in the photo.

Piszar says early indications are good. "Our dealers are ordering more than we can build right now, and days to turn are incredible. People are waiting in line for these."