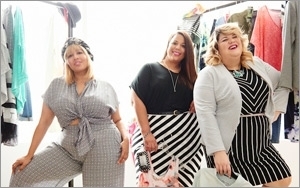 Target is rolling out Avi & Viv, a trendy new fashion line aimed at plus-size women. And in an effort to skirt controversy and make sure the brand reaches its intended audience, it’s wooing women with a concerted outreach to the only real support these women get: Plus-size fashion bloggers.

Set to appear in stores and online next month, Target says the trendy line will be updated monthly, with pieces priced from $10 to $80. And to introduce the collection, the Minneapolis-based retailer invited Nicolette Mason, Chastity Garner and Gabi Gregg, all bloggers with considerable followings, to its headquarters for a preview.

While clothing brands routinely reach out to bloggers for input and publicity, the plus-size market requires some special handling. For one thing, it’s a hot growth segment. The NPD Group reports that the category, which typically includes women’s size 18 and up, had $17.5 billion in sales in the 12-month period ended in April, up 5% from the prior year.

And its selection shows Target is well aware of the power of social media: Garner had previously asked her readers to boycott Target when it introduced a line with nothing that would fit plus-sized women: “My heart sinks,” she wrote last summer, saying Target had “once again made me feel like a second-class customer, and because of that I’m going to have to discontinue my relationship with you altogether.”

Other brands have gotten spanked on social media for putting out plus-size images that aren’t plus-enough: Calvin Klein’s underwear ads recently featured a “plus size” model who is a size 10, who then posted pictures of herself looking … pretty darn thin. (Weighing in on the flap, New York magazineeven speculated she was probably closer to a size 8.)

While online sales continue to be strong (up 31%, says NPD, department stores are also gaining, up 7%. And brands are definitely trying to step up their game: Last fall, Eden Miller’s Cabiria made headlines as the first plus-size label to have a show during Fashion Week. And Isabel and Ruben Toledo, the husband and wife designer team, create a line sold exclusively at Lane Bryant.