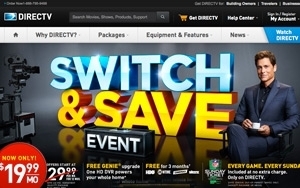 Nearing a completed acquisition of its proposed $48.5 billion deal for DirecTV, AT&T says it is considering changing the brand name of the big satellite TV provider.

During an interview at World Economic Forum in Davos, Switzerland with The Wall Street Journal, Randall Stephenson, CEO of AT&T, says the company has been testing both “AT&T” and “DirecTV” for the name of a newly combined pay TV provider.

"We haven't decided yet how we are going to brand it," Stephenson said. "We're testing the DirecTV brand and the AT&T brand, so we're doing a lot of thinking."

For several years now, AT&T has operated its “U-verse” IPTV-delivered TV provider, which now has around 7 million subscribers. But Stephenson reveals that AT&T’s “U-verse” as a business continues to struggle.

But with DirecTV, the business takes on a different light. "Put it together with DirecTV, and we have a profitable business to sell into. With DirecTV, we have an ability for someone to walk out of an AT&T store with an iPad and lots of programming. No one else can do that."