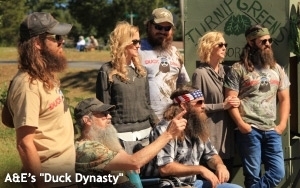 Anyone who watches TV regularly already knows this: Commercial clutter is at an all-time high.

Or so it seems. While it may not be the case across the board on every network, it’s clear to all of us casual grazers of TV that you are more likely to hit commercials these days than actual program content while clicking through the cable lineup at any given time.

And now, two separate research studies have quantified the situation. The reports -- one from Todd Juenger of Bernstein Research and the other from Michael Nathanson of MoffettNathanson -- found that a number of networks, particularly on cable, really loaded up on commercials in the fourth quarter of last year.

According to the Nathanson report, the companies with the biggest increases were Viacom (MTV, VH1, Nickelodeon, Spike, Comedy Central, BET and others) with a 13 percent increase over fourth quarter 2013; A&E Networks (A&E -- home of “Duck Dynasty,” Lifetime, History Channel and others), up 10 percent; and Discovery Networks (Discovery, TLC, Animal Planet, OWN and the rest) up 9 percent.

The study suggests that the commercial loads were increased to counter-balance fourth-quarter ratings declines. The study noted that ratings declined in the fourth quarter by 7 percent on both basic cable and broadcast TV.

“The data clearly shows that networks can offset ratings challenges and pricing weakness with more inventory,” the study said. “However, we worry that it is a dangerous long-term game that ultimately devalues the consumer experience and reduces ad efficacy.”

From the standpoint of the casual viewer idly grazing with his remote control, it doesn’t seem like a stretch of the imagination to assume that commercial breaks have gotten longer too -- a phenomenon that has been fairly easy to notice for a number of years now.

My own personal epiphany came a couple of years ago while watching “Jersey Shore” on MTV and calculating roughly that the actual half-hour show came to about 15 minutes (or maybe 16 minutes) in length, with commercial breaks seemingly coming every three minutes (which may have been a blessing in disguise if you ever sat through an episode of “Jersey Shore”).

More typically though, a grazer has this experience time and time again: The show you’re watching comes to a commercial break and rather than endure what you assume will be 4, 5 or even 6 minutes of commercials, you blow them off completely and go in search of some other program to watch during that interval.

Sometimes you come across another show you don’t mind watching midway into it. And since you know your other show won’t be back for 6 minutes, you have time to watch this other show until its next commercial break -- which you then skip in the same way by returning to your previous show.

Often though, when grazing during commercial breaks, you really only encounter other long commercial breaks, leading to the conclusion that TV is becoming more “commercial” than “program.” Perhaps more crucially, it can make you fed up with commercial television and perhaps more willing to go and seek commercial-free options such as pay cable (HBO and Showtime) or Netflix -- the very content providers the commercial networks would rather you not emigrate toward.

That happens to be one of the conclusions reached by the Juenger report. “[Networks whose ratings decreased in the fourth quarter] are protecting margins using ‘last resort’ tactics: decelerating investment in original content, and increasing the (already heavy) ad load,” the report said. “Both of these actions will further drive away audiences and decrease advertiser ROI. …

“The efficacy of the ads is decreased by the clutter,” the Juenger report continued, “the viewer engagement is certainly reduced, and most damning of all -- surely the ‘stuffed’ ads are piling on frequency, not increased reach, among the same group of brain-dead viewers who are happy to watch repeat content with even more ads than the already onerous U.S. average. That doesn’t seem like an attractive audience target for many brands, except maybe certain infomercial products.”

Brain-dead? Who, me? Hey, I’m just trying to watch TV, and all of these commercials are getting in the way.

advertising, research, tv
4 comments about "Anyone With Eyes Can See That Commercial Clutter Is On The Rise ".
Check to receive email when comments are posted.
Read more comments >
Next story loading