Mazda, GMC, Volvo Get Their Own Super Bowl Tickets 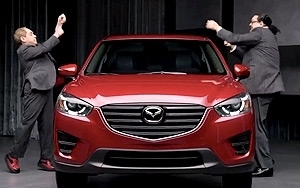 Mercedes-Benz, Kia, Hyundai, Chrysler, and Nissan were in the Super Bowl, with Fiat Chrysler having three spots in the game. There were other automakers, however, that were activating against the game, but doing so without handing NBC an envelope stuffed with 4.5 million Lincolns.

General Motors used the game to talk about the GMC, although not with an ad. The premium light truck and SUV division of the automaker is, in fact, the "Official Vehicle of the NFL," so it kind of had to be involved somewhere, somehow. “Somewhere” was on the ground in Phoenix. The brand did a mobile studio with interactive TV host Jenni Hogan, who did behind-the-scenes coverage of Super Bowl weekend.

The studio was actually a GMC Yukon XL Denali, so GMC also got to talk about its 4G LTE WiFi platform delivered via OnStar, which Hogan used. She talked to athletes, celebrities, did the red carpet reporting, covered private parties, etc. A social tie-in was at #VIPwithGMC, with content at www.tagboard.com/VIPwithGMC.

GMC also had 600 vehicles as transport for stars, celebrities, athletes and the like, and an experiential footprint with the "NFL Experience Engineered by GMC" at the Phoenix Convention Center, where GM unveiled 32 "white diamond" 2015 GMC Yukon Denalis that had NFL team logos on the hood. The exhibition included various interactive displays, player autographs, and all the usual fun stuff.

Mazda ran advertising during the game, but via spot buys in select markets and on YouTube. The ad, which was getting digital support, featured magician duo Penn and Teller, who made the Mazda CX-5 compact crossover appear, then cut it in half (virtually). and rode around town as passengers. The ad goes national mid-month.

Volvo did a much more guerrilla approach, with its "Interception" campaign, which was pretty much what it sounds like: consumers were asked to tweet to #VolvoContest who they think deserves a new Volvo CX60 crossover. But they had to tweet that message while another car company's Super Bowl ad was airing. Volvo will respond, and each person must then tell why his or her nominee was chosen. Volvo will give away five vehicles.

The Super Bowl might be a good regional strategy for automakers looking to build a presence in the middle of the country and the Northeast. Online marketing platform Rhiza's "Rhiza Ratio," using Polk data, looked at automakers who have consistently bought air time between 2010 and 2014. The firm argues that Kia, Hyundai and Volkswagen all saw an overall decline in market share between 2012 and 2014.